If you wear socks on your ears, you won’t be punished. Crossing a street against a red light is another matter—it’s against the law. Laws are official rules made by governments. They keep peace and create order. When people break laws, their governments punish them.

HOW DID LAW COME ABOUT?

Long ago, people lived only in small tribal groups. They lived together, followed the same traditions, and worshipped the same gods. There were no formal laws. Instead, people were guided by their customs, morals, and religion. 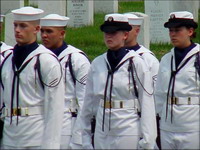 Have you ever wanted to look out over the ocean from the deck of an enormous ship? Or maybe you’ve dreamed of traveling in a submarine deep beneath the water. Sailors in a navy do these things every day.

WHAT DOES A NAVY DO?

A navy is part of a country’s military force. Navies are military forces on, under, and over the sea. They are made up of ships, submarines, airplanes, and sailors. Navies protect their country’s ships and shores. In war, navies attack enemy coasts and ships.

The Marines fight on land, sea, and in the air. They are trained to attack quickly and to carry out attacks from the water on an enemy shore. The United States Marines Corps defends United States naval bases and ships. Marines also guard U.S. embassies—places in other countries where U.S. ambassadors live and work.

Every major country has an army, but only about 30 countries have a marine corps. In most of these countries, the marines are part of the navy. The U.S. Marine Corps is trained to fight on its own, without the U.S. Army or Navy. The U.S. Marines are sometimes called “leathernecks” because their early uniforms had leather collars.

A constitution states a country’s basic rules and principles. In most countries, these are written down in one official document. Not in Canada. The constitution of Canada consists of unwritten laws and a group of written documents.