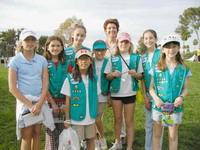 The Girl Scouts help girls build skills. Those skills have changed with the times. The first achievement badge—Child Nurse—was awarded in 1912. It was given to girls who showed they could care for children.

Today, Girl Scouts earn badges for achievements in many areas, including math, science, arts, sports, and managing money. They can even earn awards online for exploring computers and cyberspace.

WHO ARE THE GIRL SCOUTS?

There are about 3 million members of the Girl Scouts of the United States of America. Girls of all backgrounds are welcome to join. Scouts range in age from 5 to 17. 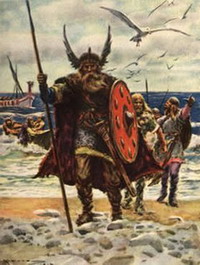 People ran and hid when they saw Viking ships coming. “From the fury of the Northmen, good Lord deliver us!” they prayed. The Vikings were daring, skillful sailors and frightening warriors. For 300 years, from ad 800 to 1100, they terrorized much of northern Europe.

The Vikings came from Scandinavia, an area in northern Europe that now includes the countries of Norway, Denmark, and Sweden. The climate there is harsh, with bitter winters and short summers. Viking families struggled to survive. They grew oats and barley during the short growing season. They also hunted deer, bear, and wolves in the woods and caught fish, seals, and whales from the ocean.

Pyramids and pharaohs, mummies and magic, picture writing on papyrus—ancient Egypt had all this, and much more. Rich, powerful, and peace-loving, this North African kingdom was home to a splendid civilization that lasted 3,000 years, from about 3300 bc to 30 bc.

Ancient Egypt was a vast territory, stretching 700 miles (1,100 kilometers) southward from the Mediterranean Sea. Most of it was hot, dry, and dusty. The Egyptians called it Deshret (red land). But the world’s longest river, the Nile, runs through this desert. Every year, the river flooded the surrounding land.

“Go West!” is a saying repeated through American history. The westward movement began soon after the first English colonists reached North America in the early 1600s. This movement took people from settled regions in the East to lands farther west. It led pioneers to cross rushing rivers, towering mountains, and windswept plains.

In a little over 200 years, American settlers pushed west from the Atlantic Ocean to the Pacific, a distance of nearly 3,000 miles (nearly 5,000 kilometers). Most of these settlers had European ancestors. Each wave of pioneers expanded the land, wealth, and power of the United States.

Without the Greeks, who would have given us science, technology, democracy, politics, drama, and history? All of these words, as well as the ideas they represent, originated in ancient Greece.

WHERE WAS ANCIENT GREECE?

Greece is a mountainous peninsula that juts into the Mediterranean Sea. It includes hundreds of rocky islands off the coast. But the people of ancient Greece settled over a much wider area, from southern France to Asia Minor (now Turkey). Everywhere they went, they brought their language and traditions with them.