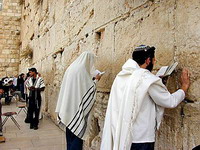 Judaism is the religion of the Jewish people. It is one of the oldest religions, and it is based on the belief in one God. Judaism deeply influenced both Christianity and Islam. All three religions began in the Middle East.

The Bible is the sacred book of Judaism. Christians refer to the Jewish Bible as the Old Testament. It is a collection of many books. Some books of the Bible tell the history of the Jewish people and show how God was active in human events. Some books set down laws and rules. Other books consist of poetry or speeches.

What was the biggest, richest, and most powerful nation of ancient times? The mighty Roman Empire! Based in the city of Rome, it stretched across three continents and included millions of people. The Roman Empire lasted for 500 years.

According to legend, the city of Rome was founded in central Italy in 753 bc. As Rome grew richer and stronger, its soldiers took over nearby land. Rome’s well-trained, disciplined army was a fearsome fighting machine.

What do knights wearing shining armor, archers carrying longbows, men marching in orderly lines, cannons, guns, and bombs have in common? They’re all developments that improved armies. Armies have been around for thousands of years.

An army is the portion of a country’s armed forces that fights on land. (The navy fights at sea, and the air force fights in the air.) An army includes soldiers, weapons, and other equipment. It also includes a support system set up to provide soldiers with transportation, supplies, medical care, and information about the enemy.

Although armies and navies have been fighting for thousands of years, air forces are fairly recent. An air force needs airplanes, and the airplane was only invented in 1903. The airplane soon became an important weapon of war.

Planes equipped with machine guns shot one another out of the sky for the first time during World War I (1914-1918). Pilots sometimes tossed hand grenades (small bombs) from the cockpit onto enemy troops on the ground.

WHAT DOES AN AIR FORCE DO?

Today, most nations have an air force for their defense. An air force protects a country from attack by air. It uses radar and airplanes to detect enemy aircraft. Fighter planes and missiles then intercept and destroy enemy airplanes.

What would happen if there were no banks? Where would you get money? Would there even be any money? The United States and Canada each have one bank that decides how much money to issue.

WHERE DOES MONEY COME FROM?

The bank in charge of the money supply is called a central bank. Before there was a central bank, lots of banks printed money. But you couldn’t always use your money if you traveled. Stores and banks in other parts of the country might not accept it. And if your bank went out of business, you were out of luck. You lost your savings.