In Viet Nam, the ao dai is the traditional dress for women. Developed from Chinese court clothing in the 1930s, this style of clothing went out of fashion in the north in 1954 and in the south in 1975. Recently, however, it has made a comeback and is regaining popularity in the south among schoolgirls and office workers, and is being worn at formal functions.

An indication of social standing, the ao dai is worn by women who work as shop assistants or who have a higher social status, while manual workers typically wear a loose top and baggy pants called an ao ba ba.

The ao dai is considered to be an elegant, yet demure, garment. Traditionally, long, wide- legged trousers are worn under a high-necked, long-sleeved, fitted tunic with slits along each side.

Take a peasant's common conical hat, add a touch of this and a little of that, and you will have the idea, but not quite an authentic Non Bai Tho or "Poetical Leaf" from Central Vietnam. Just a few simple arrangements added to the conical form are enough to give the Vietnamese leaf-covered hat unique features found nowhere else among Asia’s various types of conical hats.

The legend of the conical hat is related to maternal love and the history of rice growing in Vietnam.

Once upon a time, the legend says, when a deluge of rain was falling there descended from the sky a giant woman wearing on her head four huge round leaves as large as the sky itself and stitched together by bamboo sticks. The leaves protected humankind, then still naked, from the rain. 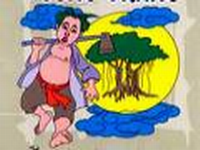 Long, long time ago there was a clever boy whose name was Cuoi. He did nothing with his cleverness but to play trick on people around him. He lived with his uncle and aunt who were usually suffered from his cheats.

Once day Cuoi came to the field and broke the bad new to the uncle that his wife had fell down from the ladder and bled. The man was so frighten that he ran to his home without saying a word. Cuoi at that time reached the house before his poor uncle by a short cut then broke another bad new to his aunt that her husband was collided by the buffalo and was going to died. The poor woman was scared and immediately ran out to the field.

Dong Ho pictures are printed on a special kind of Dzo paper. The printing paper is made of bark of a tree called "Dzo". Artists use pine leave brushes to coat Dzo paper with sea bivalve mollusk powder to create a sparkling colorful background. Colors of the painting are refined from various kinds of tree leaves, which people can easily find in Vietnam. 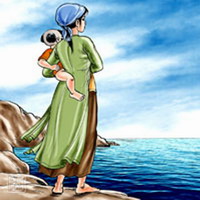 Long time ago, in a village on the highland region, lived two orphans, one was a young man about twenty years old, the other was his seven years old sister. Because they were alone in this world, they were all one for the other. On a beautiful day, On a beautiful morning, he found his wife sitting in the back yard drying her long black hair under the sunshine. At the time when she glided the comb on her hair that she lifted with her other hand, he discovered a long scar above the back of her neck. Surprised, he asked her for its cause. Hesitating, she began to tell the story crying:

I am only the adoptive daughter of the merchant. Orphaned, I lived with my brother who, fifteen years ago for unknown reasons, injured me with a blow of an ax and abandoned me in the forest. I was rescued by the robbers who sold me to this merchant who had just lost his daughter and who was sorry for my situation. I don't know what happened to my brother and it is hard for me to explain his insensitive act. However we love each other so much.