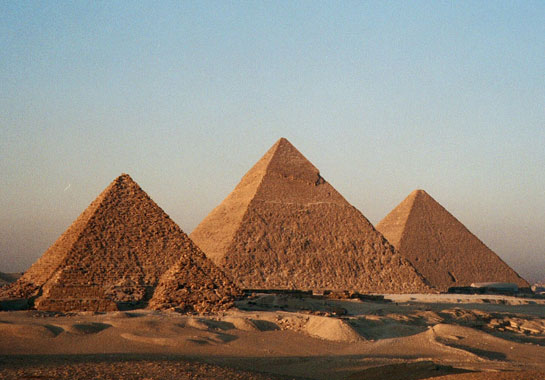 Pyramids (Egypt), large structures with four triangular sides that meet in a point at the top, directly over the center of the pyramid’s square base. Ancient peoples in several parts of the world built pyramids, but the Egyptians constructed the biggest and most famous pyramids

The ancient Egyptians built more than 90 royal pyramids, from about 2630 bc until about 1530 bc. During that time, the pyramid form evolved from a series of stepped terraces that resembled the layers of a wedding cake to the better-known, sloped pyramidal shape.

The first pyramid, the Step Pyramid at Şaqqārah, was constructed during the reign of King Djoser (2630 bc-2611 bc). The largest pyramid is the one built for King Khufu, at the site of modern Giza. Khufu’s pyramid, known as the Great Pyramid, is the only one of the Seven Wonders of the World that still survives.