It’s a warm summer afternoon in a park or garden. Bees are buzzing around the flowers. You might be sitting in the sun and feeling kind of lazy. But the bees are very busy doing work that is important to you.

The bees are going from flower to flower. They are collecting a liquid called nectar and yellow grains called pollen. The bees use nectar and pollen as food. They also do something wonderful as they go about collecting. The bees take pollen from one plant to another. Some pollen sticks to a bee’s legs and body. It rubs off when the bee visits another plant. In this way bees pollinate, or fertilize, plants.

Pretend you are on a TV quiz show. The question is, “What is a bird?” Think carefully before you answer. Is a bird an animal that can fly? Bees and butterflies are animals that fly, but they’re not birds. Penguins, emus, and ostriches are birds, but they can’t fly. You answer, “A bird is an animal with feathers and wings.” “Correct!” says the quiz show host.

A cat lies on your lap, purring contentedly. Suddenly it snaps to attention. Its whiskers twitch. Its ears stand up. It launches itself at the windowsill. It makes a strange sound and bats at the window. It’s after a squirrel on the back fence.

That’s a cat for you. Cats outnumber dogs as the favorite pet of Americans. The cat is also a skillful predator. It’s designed by nature for hunting mice and other small animals.

THE BODY OF A CAT

Cats closely resemble their fossil ancestors of 34 million years ago. 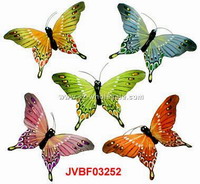 Imagine sucking up a drink through your tongue. You wouldn’t need a straw to drink soda pop. You would just stick your tongue in and slurp.

This is how most butterflies eat. They stick their tongues into flowers and suck up sweet juices. Butterflies have long, hollow tongues. The shortest tongues are less than an inch long. The longest tongues are several inches long.

WHY DO BUTTERFLIES HAVE COLORFUL WINGS?

Colorful wings help butterflies find each other. Often male and female butterflies have different colors or patterns on their wings. Butterflies can see colors and patterns. 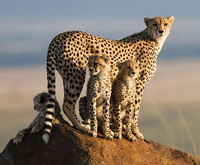 Can you move as fast as a car? Probably not, unless the car is going very slowly. But a cheetah can keep up with a car. Cheetahs can run as fast as 58 miles (93 kilometers) per hour. That’s as fast as a car on the freeway! Cheetahs are probably the fastest animals on Earth.

Cheetahs are big cats, a bit smaller than lions or tigers. Cheetahs have a yellow to pale brown coat covered with black spots. Their coloring helps them hide in bushes and grass.

The spots become rings on the cheetah’s long tail. Each cheetah’s tail has a different pattern of rings. Scientists use the tails to tell cheetahs apart.

Cheetahs don’t roar like some big cats. Instead they make purrs, bleats, barks, and chirps. The chirps can sound a lot like a bird!