The world is full of all sorts of animals. Dogs, birds, snakes, frogs, whales, and ants are just a few kinds of animals alive today. But the animals we have today did not always exist. They developed from other animals that lived long ago. Those early animals included dinosaurs, tiny ancestors of horses, and gigantic flightless birds.

Those animals and many others became extinct, or died out. They are called prehistoric animals because they lived in prehistoric times. Prehistoric times are all of time until about 5,500 years ago. That is when people began to invent writing and record history. But most extinct animals lived much longer ago than that.

Reptiles are cold-blooded. Their bodies are the same temperature as the air or water around them. Reptiles cannot make body heat. They cannot sweat to cool off.

Can you bend over backward and touch your nose to your feet? Can you hold your breath underwater for two hours? Can you dive hundreds of feet in icy water? Of course you can’t. You’re not a seal.

Seals live in the ocean, but they breathe air just as dogs, whales, and you do. Like those animals, seals are mammals. Some seals are the size of small cars. Other seals are no bigger than the average dog.

Rhinoceroses are known for the horns on their noses. The name rhinoceros comes from two words that mean “nose” and “horn.” They use their horns to defend themselves. The largest rhinoceros horn on record was 5 feet (1.6 meters) long!

HOW BIG IS A RHINOCEROS?

People often compare the rhinoceros, or rhino, to a tank. Rhinos are one of the biggest land animals. Hippos are bigger, but they live mostly in water. Giraffes are taller, but not as heavy. Overall, the rhino ranks second only to the elephant in size. 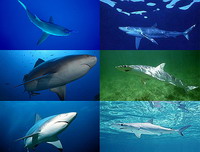 When you think of sharks, you probably think of big jaws and teeth. That is what sharks are known for. Sharks are also known for their skill in hunting prey (animals they eat). But some sharks don’t hunt, and some have really small teeth. The largest sharks, the whale shark and the basking shark, use a kind of strainer, instead of teeth, to catch food. These sharks strain tiny plants and animals out of the water that enters their mouths as they swim.

A shark is a fish that lives in the sea. Sharks have lived on Earth for almost 400 million years.

Today, there are about 375 species (kinds) of sharks. The smallest is the dwarf dogfish, less than 8 inches (20 centimeters) long. The huge whale shark can be more than 50 feet (15 meters) long.

Sharks, like all fish, are vertebrates (animals with a backbone). A shark’s skeleton, however, is not made of bone. It is made of a bendable material called cartilage.