By 1773, Britain's tax on tea had American colonists steaming. Colonists fought this latest British tax by refusing to buy tea. Some people even smashed shop windows where tea was sold. Angry mobs dragged tea sellers through the streets.

NO TAX ON TEA! 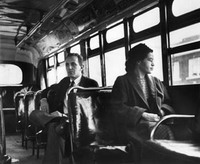 Rosa Parks was tired. She’d had a long day at work, and all she wanted to do was sit down and rest her aching feet. But the bus driver on the way home ordered her to get up. The driver wanted to give her seat to a white man who had just gotten on the bus. Parks was black, and black people were expected to move to the back of the bus or even stand up so that white people could sit.

On that particular day, December 1, 1955, Parks decided she’d had enough. She refused to give up her seat, and the police in Montgomery, Alabama, arrested her for it! Parks did not start the civil rights movement. But her arrest played an important role in the struggle for equal black rights in the United States. 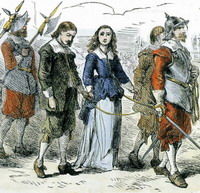 How did it feel to pack your belongings, board a ship, and sail thousands of miles across the Atlantic Ocean to a new land? The first English colonists who arrived in North America in the early 1600s faced a dark wilderness of forests. There were no towns, shops, churches, or farms. Survival required hard work and sacrifice. Yet each decade saw more people moving to this new land

HOW DID THE COLONIES GROW?

The population of the colonies in America boomed after 1700. By 1750, about 900,000 Europeans lived in the 13 British colonies that would one day become the United States. A large number of Africans, about 240,000, lived in the colonies by this time.

The Civil War divided the United States into two warring sides: North and South. It is sometimes called the War Between the States. The war lasted from 1861 to 1865. More than 600,000 soldiers died in the war. The war held the United States together and ended slavery in the nation.

Cotton and other crops were grown on large plantations in many parts of the South. Slaves from Africa tended the fields and picked the cotton.

Planters in the South owned nearly 4 million slaves. Northern states had outlawed slavery, and many Northerners believed that slavery should be outlawed in all states.

Congress of the United States

For many people, the Capitol building in Washington, D.C., is a symbol of American democracy. With its huge dome, the Capitol stands on Capitol Hill and is where the United States Congress meets. But what exactly is Congress? What does Congress do?

WHAT IS THE UNITED STATES CONGRESS?