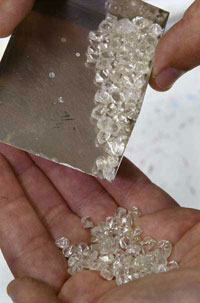 A diamond is just carbon in its most concentrated form. That's it -- carbon, the element that makes up 18 percent of the weight of your body. In many countries, including the United States and Japan, there is no other gemstone as cherished as the diamond, but in truth, diamonds are no rarer than many other precious gems. They continue to demand higher market prices because the majority of the diamond market is controlled by a single entity.

In this article, we will track a diamond from the time it is formed to when it reaches the Earth's surface. We will also examine the artificial rarity created by the diamond cartel, De Beers, and briefly discuss the properties of these gems.

Carbon is one of the most common elements in the world and is one of the four essentials for the existence of life. Humans are more than 18 percent carbon. The air we breathe contains traces of carbon. When occurring in nature, carbon exists in three basic forms:

·   Graphite - A soft, black mineral made of pure carbon. The molecular structure is not as compact as diamond's, which makes it weaker than diamond.

·   Fullerite - A mineral made of perfectly spherical molecules consisting of exactly 60 carbon atoms. This allotrope was discovered in 1990.

Diamonds form about 100 miles (161 km) below the Earth’s surface, in the molten rock of the Earth’s mantle, which provides the right amounts of pressure and heat to transform carbon into diamond. In order for a diamond to be created, carbon must be placed under at least 435,113 pounds per square inch (psi or 30 kilobars) of pressure at a temperature of at least 752 degrees Fahrenheit (400 Celsius). If conditions drop below either of these two points, graphite will be created. At depths of 93 miles (150 km) or more, pressure builds to about 725,189 psi (50 kilobars) and heat can exceed 2,192 F (1,200 C). Most diamonds that we see today were formed millions (if not billions) of years ago. Powerful magma eruptions brought the diamonds to the surface, creating kimberlite pipes.

Kimberlite is named after Kimberley, South Africa, where these pipes were first found. Most of these eruptions occurred between 1,100 million and 20 million­ years ago.Kim­berlite pipes are created as magma flows through deep fractures in the Earth. The magma inside the kimberlite pipes acts like an elevator, pushing the diamonds and other rocks and minerals through the mantle and crust in just a few hours. These eruptions were short, but many times more powerful than volcanic eruptions that happen today. The magma in these eruptions originated at depths three times deeper than the magma source for volcanoes like Mount St. Helens, according to the American Museum of Natural History.

The magma eventually cooled inside these kimberlite pipes, leaving behind conical veins of kimberlite rock that contain diamonds. Kimberlite is a bluish rock that diamond miners look for when seeking out new diamond deposits. The surface area of diamond-bearing kimberlite pipes ranges from 2 to 146 hectares (5 to 361 acres).

Diamonds may also be found in river beds, which are called alluvial diamond sites. These are diamonds that originate in kimberlite pipes, but get moved by geological activity. Glaciers and water can also move diamonds thousands of miles from their original location. Today, most diamonds are found in Australia, Borneo, Brazil, Russia and several African countries, including South Africa and Zaire. 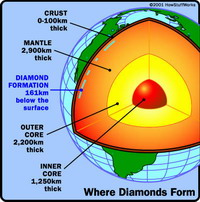 The Properties of Diamonds

Diamonds are found as rough stones and must be processed to create a sparkling gem that is ready for purchase.

As mentioned before, diamonds are the crystallized form of carbon created under extreme heat and pressure. It's this same process that makes diamonds the hardest mineral we know of. A diamond ranks a 10 on the Mohs Hardness Scale. The Mohs Scale is used to determine the hardness of solids, especially minerals. It is named after the German mineralogist Friedrich Mohs. Here's the scale, from softest to hardest:

1. Talc - easily scratched by the fingernail

2. Gypsum - just scratched by the fingernail

3. Calcite - scratches and is scratched by a copper coin

4. Fluorite - not scratched by a copper coin and does not scratch glass

5. Apatite - just scratches glass and is easily scratched by a knife

6. Orthoclase - easily scratches glass and is just scratched by a file

7. Quartz - (amethyst, citrine, tiger's-eye, aventurine) not scratched by a file

8. Topaz - scratched only by corundum and diamond

9. Corundum - (sapphires and rubies) scratched only by a diamond

10.   Diamond - scratched only by another diamond

Even though diamond is only one level higher on the scale than corundum, diamond can be anywhere from 10 to hundreds of times harder than this class of gems.

It is the molecular structure of diamonds that makes them so hard. Diamonds are made of carbon atoms linked together in a lattice structure. Each carbon atom shares electrons with four other carbon atoms, forming a tetrahedral unit. This tetrahedral bonding of five carbon atoms forms an incredibly strong molecule. Graphite, another form of carbon, isn't as strong as diamond because the carbon atoms in graphite link together in rings, where each atom is only linked to one other atom.

Th­ere are special techniques that are used to cut and shape a diamond before it gets to the jewelry store. Diamond cutters use these four basic techniques:

1. Cleaving - To cut a rough diamond down to a manageable size, the cutter must cleave it along the diamond's tetrahedral plane, where it is the weakest. A wax or cement mold holds the diamond in place while the cutter carves a sharp groove along the plane. The cutter places a steel blade in the groove and forcefully strikes it, cutting the rough diamond in two.

2. Sawing- Sometimes, diamonds have to be cut where there is no plane of weakness, which cannot be done with cleaving. Instead, the cutter saws the diamond using a phosphor-bronze blade rotating at about 15,000 rpm. Lasers can also be used to saw diamonds, but the process takes hours. During the sawing step, the cutter decides which parts of the diamond will become the table (the flat top of the stone with the greatest surface area) and the girdle (the outside rim of the diamond at the point of largest diameter). Then, he proceeds to cutting.

3. Bruiting/Cutting - This technique gives diamonds their shape. When diamonds are cut by hand, the technique is called bruiting -- cutting refers to bruiting by machine. When the cutter shapes diamonds by hand, he relies on the diamond's hardness as his tool -- he uses diamonds to cut diamonds. He uses a small, stick-like instrument with a cement-filled bowl at the tip to hold the diamond. The diamond is inserted in cement with just one corner exposed. Using one of these sticks in each hand, the cutter rubs the exposed diamond parts together to bruit them. In the mechanical process, the diamond is placed in a lathe, and another diamond in the lathe rubs against it to create the rough finish of the g­irdle.

4. Poli­shing - To create the diamond's finished look, the cutter places it onto the arm above a rotating polishing wheel. The wheel is coated with an abrasive diamond powder that smoothes the diamond as it is pressed against the wheel.

Diamonds are judged on several factors that determine their beauty. Most diamonds never reach the consumer market because they are too flawed. Often, these diamonds are used for industrial purposes -- as an abrasive, for drill bits or for cutting diamonds and other gems. If you've ever purchased a diamond, you've heard of the "4 Cs:"

1. Cut - This refers to a diamond's geometric proportions and how it has been cut. When a diamond is cut, facets are created and the diamond's finished shape is determined.

2. Clarity - This is the measurement of a diamond's flaws, or inclusions that are seen in the diamond. Clarity levels begin with Flawless and move down to Very Very Slight (VVS), Very Slight (VS) and Slightly Included (SI).

3. Carat - This is the weight of a diamond. One carat is equal to about 200 milligrams.