Soccer, game played by two teams on a rectangular field, in which players attempt to knock a round ball through the opponents’ goal, using any part of the body except the hands. Generally, players use their feet and heads as they kick, dribble, and pass the ball toward the goal. One player on each team guards the goal. This player, the goalkeeper, is the only player allowed to touch the ball with the hands while it is in play.

Soccer is a free-flowing game that has relatively few rules and requires little equipment. All that is needed to play is an area of open space and a ball.

Much of the world's soccer is played informally, without field markings or real goals. In many places, the game is played barefoot using rolled-up rags or newspapers as a ball. Soccer is the world's most popular sport, played by people of all ages in about 200 countries. The sport has millions of fans throughout the world.

Only in the United States and Canada is the game referred to as soccer. Outside these countries the sport is commonly called football, or fútbol in Spanish-speaking countries, where the game is particularly popular. The official name of the sport is association football. The word soccer is a slang corruption of the abbreviation assoc.

The Federation Internationale de Football Association (FIFA) is the worldwide governing body of soccer. FIFA governs all levels of soccer, including professional play, Olympic competitions, and youth leagues. The organization also governs the sport’s premier event, the World Cup, an international competition held every four years pitting national teams from 32 countries against one another.

Evidence from many ancient societies—Chinese, Greek, Maya, and Egyptian—reveals that kicking games were a part of those cultures. The modern game of soccer began in the 19th century in England, when a variety of football games developed, all of which involved both handling and kicking the ball. The first laws of the modern game were supposedly drafted in 1862 by J. C. Thring of the Uppingham School. At a meeting of the London Football Association (FA) in 1863, the game was split into rugby football (the parent sport of American football), which permitted handling and carrying the ball, and association football, or soccer, which banned the use of the hands. 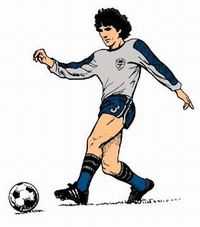 At first soccer was played mostly in private schools and universities, but before long people of the working classes picked up the sport. The FA Cup, a tournament first organized in 1871, sparked the rapid spread of soccer in England. (The tournament, which is still played, climaxes with the annual Cup Final at Wembley Stadium in London.) An 1872 game in Glasgow, Scotland, between an English all-star team and its Scottish counterpart marked the beginning of international play. In 1885 the FA recognized the legitimacy of professional players and regular league play started in England in 1888.

Soccer's global spread began in the late 1800s, when British traders, sailors, and soldiers carried the sport all over the world. Germans, Italians, and Austrians were eager converts in Europe, while Argentines, Uruguayans, and Brazilians took quickly to the sport in South America. FIFA was formed in 1904. By 1930 professional leagues were operating in many countries, and that year FIFA organized the first World Cup in Uruguay.

One nation that long resisted soccer was the United States. Soccer was played in the United States, mostly among immigrants, but it was not until the 1970s that a national professional league gained some popularity. The North American Soccer League (NASL), founded in 1968, earned a devoted following thanks in part to the import of players such as Brazilian star Pelé, and by 1980 the league had 24 teams. But the league was not financially sound, and in 1984 it went out of business. However, the NASL left a legacy of growing American involvement in the sport at the youth level. By the 1990s soccer was the fastest-growing college and high school sport in the United States.

The growing number of players in the United States attracted sponsorship for the sport, and faith in its future was recognized by FIFA when it granted the USSF the right to organize the 1994 World Cup. The event proved to be a great success, attracting nearly 3.6 million attendees over the course of its 52 games. This strong show of support led to the formation of Major League Soccer, which brought top-level soccer back to the United States two years later.

A new U.S. women’s professional league, the Women’s United Soccer Association (WUSA), started up in 2001. The league, which was formed after the great success of the Women’s World Cup in 1999, showcased many of the top female players from around the world. The eight-team league lasted three seasons before financial problems forced it to shut down after the 2003 season.

In 2002 two countries shared World Cup hosting duties for the first time, as Japan and South Korea teamed up for the first World Cup to be held in Asia. Germany was selected to host the 2006 World Cup. China was named host of the 2003 Women’s World Cup, but the competition was moved to the United States after severe acute respiratory syndrome (SARS) emerged as a serious health problem in China.