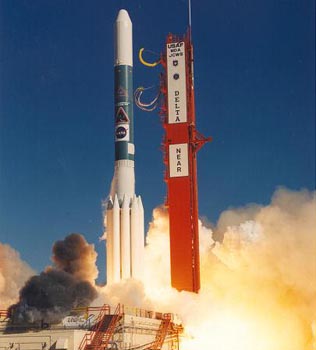 Only a big rocket can make it into outer space. No other machine is as powerful as a rocket.

A rocket looks like a long tube. Most rockets have fins on the back end to help them fly straight.

Rockets that carry fireworks can be short, only a few inches long. They are usually made of cardboard.

Rockets that go into space are huge. They are made mostly of metal.

Rockets burn fuel. Many different chemicals can be used as rocket fuel. The burning fuel makes hot gases. The gases blow out of the bottom end of the rocket. The hot gases shooting downward make the rocket go upward.

A rocket, like a balloon, has a small opening. The opening in a rocket is called a nozzle. Hot gases blasting out of the nozzle make the rocket go.

HOW DO WE USE ROCKETS?

The most powerful rockets carry satellites and spacecraft into space. Many spacecraft use smaller rockets called thrusters to move around once they’re in space.

Rockets can also be used as weapons. The rocket weapons are called missiles. Most of the rockets made are missiles.

WHAT IS A MISSILE?

Missiles are rockets that carry bombs. The British used rockets carrying bombs against the in the War of 1812. The national anthem of the even has a line about the rockets: “And the rockets’ red glare ….”

Chinese people probably invented rockets more than 1,000 years ago. By the end of the 13th century people in Asia and also knew how to make rockets.

The , , and other countries made bigger and more powerful rockets. Rockets have launched spacecraft to the Moon and most of the planets.

Space engineers are working on better rockets. They are testing rockets that use nuclear power. They are trying to build rockets that get their power from beams of light.