Radar was once a secret military weapon. In 1940 and 1941, radar helped Britain defend itself against German bombers during World War II. Today, radar has many uses. It prevents airplanes from colliding in midair. Radar is even found in many kitchens. Microwave ovens use radar technology to heat food.

Radar uses radio waves to locate airplanes, ships, storm clouds, and other large objects. A radar system sends out radio waves. These invisible waves move at the speed of light—about 186,000 miles (300,000 kilometers) a second. When the waves strike an airplane or other object, some of the waves bounce back.

The waves that come back provide information to the radar operator. They tell how far away the object is, how fast it is moving, and what direction it is moving in. The word radar comes from RAdio Detection And Ranging.

WHEN WAS RADAR DEVELOPED?

Radar was developed during the 1920s. Scientists worked on military uses of radar in top-secret laboratories during the late 1930s and early 1940s. Radar became an important weapon during World War II. Radar stations on England’s coast located German bombers before the planes reached England. British fighter planes then attacked the bombers. Radar also helped locate German submarines before they could attack American and British ships.

HOW IS RADAR USED? 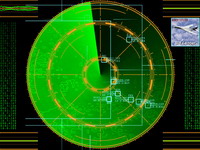 Airports use radar to keep track of planes in the air. In the control tower, air traffic controllers study radar displays that look like computer screens. Tiny dots on the screens show where planes are. The dots move as the planes move. Radar prevents collisions in the air and helps pilots land planes safely at airports. Airplanes carry radar to warn pilots if their plane is too close to another plane.

Have you seen a weather map on television? Did the weather reporter say it was a radar map? Radar locates rain, storm clouds, and moving masses of air. It can help predict thunderstorms and tornadoes.

Satellites orbiting Earth produce radar maps for predicting weather. Scientists have made pictures of Earth’s surface by using radar in satellites. During the 1990s, the Magellan spacecraft used radar to map the surface of the planet Venus. Magellan’s radar penetrated the thick clouds that surround Venus.

Police officers use radar to detect cars and trucks that are going faster than the speed limit. Stopping people from speeding improves traffic safety. But some drivers buy devices that detect radar waves. The devices warn drivers to slow down before they are caught speeding.

The military builds stealth aircraft and stealth missiles that can dodge enemy radar. Other aircraft and missiles are guided by radar systems.

Radar guns in baseball parks track the speed of pitches. That’s how the announcer knows the pitcher has thrown a 98-mile-per-hour fastball.