Lasers are powerful enough to cut through steel. Lasers are delicate enough to use in eye surgery. Lasers “read” the information coded on compact discs (CDs). These are just a few things that lasers do.

WHAT IS A LASER?

A laser is a device that produces a beam of light and makes the beam more intense. A laser beam is very exact. It can travel a long distance without spreading out and losing its power.

Laser light is unlike sunlight or light from a light bulb. To understand the difference, think of a crowded city street.

Sunlight and light from lamps are like the crowd on the sidewalk. They are made up of many colors—all the colors of the rainbow. They spread out in all directions from their source. Laser light is like the marching band. It is light of a single color. It travels in a beam. It spreads out very little, even when traveling through outer space.

HOW ARE LASERS USED?

Because lasers produce such exact beams of light, they are very useful tools. Some lasers are so powerful they can drill holes in diamonds. These lasers can cut a piece of steel to an exact shape needed for a machine part. Powerful lasers can produce temperatures of 10,000° Fahrenheit (5500° Celsius) and higher. This ability makes them useful in factories for joining together large pieces of metal. 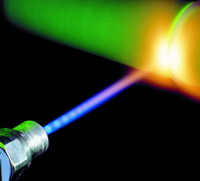 In hospitals, doctors use lasers for delicate operations such as repairing damaged eyes. The military uses lasers to guide airplanes and missiles. And laser beams are used to create colorful light shows. These are just a few of the ways we use lasers.

WHEN WERE LASERS INVENTED?

Famous scientist Albert Einstein first suggested the idea of a laser in 1917. In the 1950s, scientists began making the idea work. American scientist Gordon Gould suggested the name laser in 1957. It was short for Light Amplification by Stimulated Emission of Radiation. The first working laser was built in 1960. It was built by another American scientist, Theodore Maiman. The development of lasers advanced rapidly during the 1970s and 1980s.

Scientists today are using a huge and powerful laser to study how atoms join together in the Sun to release energy. This laser was built at Lawrence Livermore National Laboratory in California. It takes up a building the size of a football stadium.