in Sports and Entertainment 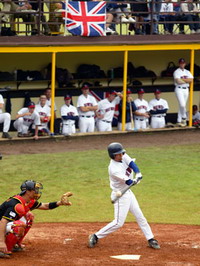 From Little League to the World Series, baseball is the game that most Americans know best. The sound of baseball games is the sound of summer across the United States.

Our talk is sprinkled with phrases from baseball. We say of a strange idea that it’s come “out of left field.” “Hitting a home run” signals success. “Throwing a curve ball” means giving somebody a surprise.

Most Americans have played some form of baseball. The game has been called America’s national pastime. It’s also the most popular team sport in Japan, Cuba, and other countries.

Baseball is a game between two teams. The team that scores the most runs wins. Batters try to move around the bases and score runs. Batters can get on base in a number of ways, most often by a hit or a walk. Fielders try to put players on the opposing team out. Fielders put players out by catching balls hit in the air or by throwing the ball to a base before the runner gets there. Pitchers try to put batters out by throwing pitches the batters cannot hit.

A manager or coach directs a team’s play. Umpires make sure the game is played according to the rules. They decide if base runners are safe or out. An umpire at home plate decides whether a pitch is a strike or a ball.

Most baseball players start playing in organized baseball leagues at a young age. They dream of competing one day in the major leagues. Major League Baseball is the highest level of baseball competition in the United States and Canada.

There are two professional baseball leagues in the major leagues: the National League and the American League. The teams in these leagues are in big cities in the United States and Canada. Major league teams play from April to October.

Baseball’s great players are honored at the National Baseball Hall of Fame and Museum. It’s in Cooperstown, New York.

Records are an important part of baseball. Baseball fans watch excitedly as past records are broken and new records are set. Players compete to set records for hitting, pitching, and fielding. There are also records that nobody wants, such as number of errors by a fielder or strikeouts by a batter.

Excitement ran high in 1998 as two players dueled to set the record for home runs in one season. Mark McGwire of the St. Louis Cardinals ended the 1998 season with 70 home runs. Sammy Sosa of the Chicago Cubs came in slightly behind with 66. Barry Bonds of the San Francisco Giants then set a new record of 73 home runs in 2001.

The most famous holder of the home run record was Babe Ruth. The Babe set a record of 60 home runs for the Yankees in 1927. His record held until 1961, when Roger Maris of the Yankees hit 61.

For many years, Babe Ruth also held the record for all-time home runs—714. Hank Aaron of the Atlanta Braves broke the record in 1974. Aaron went on to hit 755 home runs in all.

No player has come close to breaking a record set by Joe DiMaggio of the Yankees in 1941. That year, DiMaggio got at least one hit in 56 consecutive games.

Every pitcher dreams of throwing a perfect game—a game in which no batter gets on base. Very few pitchers succeed. Don Larsen of the Yankees stunned the world when he pitched a perfect game in the 1956 World Series.

Each year, the best pitcher in each league receives the Cy Young Award. The award is named after the pitcher who holds the record for major league wins, with 511. Roger Clemens has won six Cy Young Awards, more than any other pitcher.