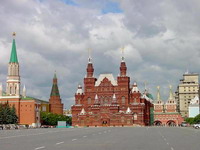 Red Square and Kremlin, landmarks that have played a central part in the political life of the city and of the former Union of Soviet Socialist Republics (USSR).

The Kremlin (Russian, Kreml') was founded in the 12th century as a fortress within the city.

Among the most notable of the secular buildings within the Kremlin are the 19th-century , housing one of the oldest and richest historical museums in , and the vast , the base of the former Supreme Soviet (legislature) of the .

Dominant among the numerous religious buildings within the Kremlin is the magnificent onion-domed Cathedral of the Assumption, scene of the coronations of tsars (the imperial rulers of prior to the Russian Revolution of 1917) and the burial place of the leaders of the Russian Orthodox Church.

, a vast open space some 73,000 sq m (87,300 sq yd) in extent, dates from the 15th century and is dominated by two impressive buildings at either end: the Cathedral of Saint Basil the Blessed, a 16th-century onion-domed building.

The late-19th-century State Historical Museum. has been the scene of many disturbances and demonstrations, and for decades it was used by the Soviet government for its May Day military parades and celebrations to mark the anniversary of the Russian Revolution of 1917.

The embalmed body of former Soviet leader Vladimir Ilich Lenin is displayed for public viewing in a mausoleum on .