Violets are blue.
Sugar is sweet,
And so are you.

Valentine’s Day is celebrated on February 14. People exchange valentines—greeting cards or gifts of candy and flowers—with friends and people they love on this day. Valentines express love and affection.

The origin of  VALENTINE’S DAY

Valentine’s Day also is the same day marked for lottery lovers. It dates back to Roman times when young boys and girls had to lead strict separate lives. But on this day on the eve of the festival of Lupercal the names of young girls were written and placed in jars.

Each young man would draw a girls name and she would then be his partner during the duration of the festival. Sometimes the pairing lasted for a year or maybe a lifetime.

Emperor Claudius was a cruel bloody ruler. When he could not recruit enough soldiers for his endless campaigns he blamed it on the men not wanting to leave their lovers and families. Consequently he cancelled all marriages and engagements in Rome. St. Valentine was a Christian priest who secretly got couples married. He was apprehended and jailed. But many visited him and showered him with notes of good wishes and flowers. One of these people was the daughter of the prison guard. Before being hauled off to his fate this holy priest left her a note thanking her for her support and signing it of as ‘Your Valentine’. Finally on the fatal day in February they dragged into the presence of the Prefect of Rome before being clubbed and beheaded. The day of his martyrdom is celebrated as Valentine’s Day.

Valentine is the name of several saints of whom two were celebrated martyrs during the reign of Emperor Claudius. One was a Roman who was killed for refusing to give up Christianity. He died on 14th February 269 AD.  Their festivals fall on 14th February. It is a popular belief that on this day birds mate and sweethearts are chosen.. In 496 AD Pope Gelasius marked February 14th to be St. Valentine’s Day in honour of the martyr. In 1969 the Roman Catholic Church formally recognized eleven martyrs to be honoured by that name on Valentine’s Day.

In course of time February 14th or Valentine’s Day became the date for exchanging messages of love. St. Valentine became the patron saint of love. Poems and simple gifts of flowers were exchanged and there was often a social gathering like a ball. 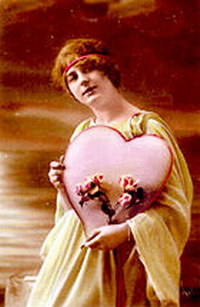 There is a tradition behind the observance of Valentine’s Day. Hundreds of years ago in England, many children dressed up as adults went singing from house to house. In Wales carved wooden love spoons were gifted. Hearts, keys and keyholes were the favored decorations on the spoons. It referred to the unlocking of hearts. In the Middle Ages the young would draw names from a bowl and wear these on their sleeves for a week, for all to see. During the time of Chaucer traditional courtly love began to flourish. Chaucer used to spell it as ‘Volantynysday’. He wrote a poem about birds coming to choose their mate on this day in honour of the engagement between Richard II of England and Anne of Bohemia.  In some other countries if young girls retained the gift that she had received it would mean that she agreed to marry him. A popular belief was that if a woman saw a Robin flying on Valentine’s Day it would signify her marriage with a sailor. Seeing a sparrow meant a happy union with a poor man. Sighting a goldfish meant marriage with a millionaire. In Paris a High Court of Love was established on Valentine’s Day 1400 dealing with love contracts, betrayals and violence. Women on the basis of poetry reading selected the judges.
Valentine’s Day does not seem to be confined only to western culture. In China The Night of the Sevens is dedicated to Love. In Japan and Korea a day known as White Day is celebrated a day after Valentine’s Day in honor of the young and love.

In USA Miss Esther Howland was the first one to send a Valentine’s card. Her father owned a stationery store and sales boomed. During the 19th century commercial valentines came to be introduced. Today the day and date means big business. Even children are exchanging cards at school. Since 2001 Greeting Card Association has started giving an annual prize –Esther Howland Award – for the most innovative card.

There are gifts galore to tempt the giddy young and it is a season for cards. After Christmas this is the time for card manufacturers to make hay. They have very cleverly manipulated a taste for the Valentine Day’s culture into a global market. Gifts are no longer simple. The diamond industry has started selling itself and others are not left behind. All this set off ripples of anti-Valentine’s Day protests in traditional pockets of the world.   A recent trend is to mark February 14th as Single Awareness Day.