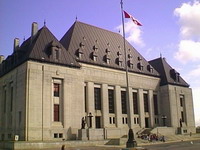 Canada’s Supreme Court does its work in the Supreme Court Building. It is located in Canada’s capital, Ottawa, in the province of Ontario.

HOW DO CASES REACH THE COURT?

There are different levels of courts in Canada. Most cases are tried (decided) first in lower courts. People who have lost their case in a lower court can ask the Supreme Court to listen to their case. The judges on the court decide if they will grant the request. They can review and change decisions made by other Canadian courts.

How do the Supreme Court justices decide which cases to hear (listen to the facts about)? Most of the cases they pick have importance to the nation. The Supreme Court also hears cases that involve interpretation—deciding on the meaning—of laws. Sometimes the Supreme Court is asked to decide if new laws follow the principles of Canada’s constitution.

HOW ARE JUSTICES CHOSEN?

When choosing justices, the prime minister and the Cabinet must make sure that the various regions of Canada are represented. At least three justices must come from the province of Québec. That’s because many of Québec’s laws are different from the laws of the rest of the country.

Once chosen, a Supreme Court justice can stay on the court until the age of 75. Except for that, it is very difficult to have a judge removed. It has never happened in Canada’s history.