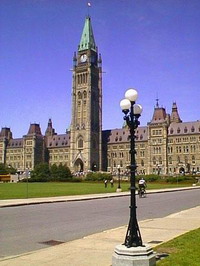 Canada has a parliamentary system of government. That means that control of the national government is in the hands of a prime minister and a parliament (lawmaking body). The job of the Canadian Parliament is to make laws and control the country’s budget.

The Canadian Parliament meets on Parliament Hill in Ottawa, Ontario. Ottawa is the capital of Canada.

THE PARTS OF PARLIAMENT

Queen Elizabeth II, who is queen of Canada as well as queen of Britain, appoints the governor-general. Members of the Senate also are appointed. Canadian voters elect members of the House of Commons.

Most members of the House of Commons support a political party. Each political party has a leader. The party that wins the most votes in an election is in power. The party’s leader becomes prime minister. At least three political parties are represented in the Canadian Parliament, and sometimes as many as five are.

The party that wins the second most votes is known as the opposition. The opposition challenges the policies of the governing party.

THE PRIME MINISTER AND PARLIAMENT

THE SENATE AND HOUSE OF COMMONS

Senators are chosen and appointed by the prime minister and governor-general. They are carefully selected to represent all parts of Canada. Senators make sure that new laws won’t be harmful to any of Canada’s provinces and territories. Senators can stay in office until age 75.

The House of Commons has about three times as many members as the Senate. Voters elect members of the House. Provinces with large populations have more members than provinces and territories with small populations.

THE QUEEN AND PARLIAMENT

Canada is an independent nation. But it is also part of the British Commonwealth of Nations. This means that Britain's queen is also queen of Canada. However, she does not have any power to rule Canada. On visits to Canada, the queen performs only ceremonial duties.