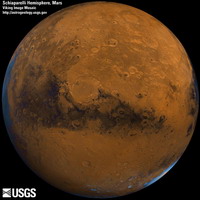 Someday people will stand on the surface of another planet. That planet will probably be Mars. Maybe you’ll be one of the people to go!

Mars is one of the brightest objects in the night sky. It looks like a reddish star. The ancient Romans named Mars after their god of war because it was the color of blood. The red planet is the next planet out from the Sun after Earth. Of all the planets in the solar system, Mars is the most like Earth.

Mars is a small, rocky planet much like Earth. Pictures of the surface of Mars sent back by spacecraft look like deserts on Earth.

Not even the hottest day at the hottest place on Earth comes close to how hot it gets on Mercury. Mercury is one of the nine planets in our solar system. Mercury is the closest planet to the Sun.

HOW HOT DOES IT GET ON MERCURY?

Daytime temperatures on Mercury can soar to 810° Fahrenheit (430° Celsius). That is hot enough to melt some metals! Mercury gets so hot because it is so close to the Sun. Mercury is 36 million miles (58 million kilometers) from the Sun, on average. Its distance from the Sun changes somewhat throughout the year. Earth is about three times farther from the Sun.

When you look up at the sky on a clear night, you see thousands of tiny points of light. A couple of the brightest points might be planets in the solar system. The rest are all stars. If you look closely, you might see a thick glowing band of faint white light crossing the sky. To see it, you’ll need to be somewhere without many streetlights. Ancient Greeks named this band of light the Milky Way.

The Sun is a star. It’s a lot closer to Earth than any other star, so it appears a lot brighter. The white glow of the Milky Way is made by billions of stars so far away that our eyes can’t see them as individual points of light. 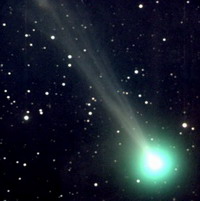 Have you ever seen a shooting star? A bright light streaks across the sky. It looks like a star falling to Earth. It’s actually a meteor. 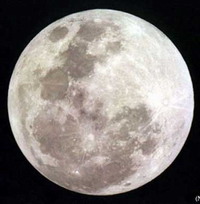 Did you ever look at the Moon and think you could see a face? Sometimes dark spots on the Moon look like eyes, a nose, and a mouth. People used to talk about “the man in the Moon.” They would joke about the Moon being made of cheese with holes in it.

The Moon is the second brightest thing in our sky, after the Sun. The Moon doesn’t make its own light. Light rays from the Sun bounce off it and make it shine. The Moon is closer to Earth than any other body in our solar system.

WHAT’S ON THE MOON?

In the 1600s, the famous Italian scientist Galileo was the first person to look at the Moon through a telescope.