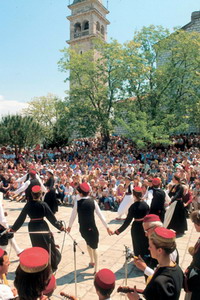 Come, sit and listen while I tell you a story. Have you ever heard of Robin Hood from Sherwood Forest, who robbed from the rich to give to the poor? How about Snow White biting into the poisoned apple? Then there’s Jack, who traded his mother’s cow for a handful of beans. But they turned out to be magic beans that grew into a giant beanstalk! What these stories have in common is that they are all folklore. They are stories passed on by word of mouth from parents to their children.

HOW LONG HAS FOLKLORE BEEN AROUND?

People have shared folklore for thousands of years. We are natural storytellers. Before there were printed books, we entertained ourselves and taught lessons through stories. Besides storytelling, people pass down folklore through jokes, songs, poetry, riddles, nursery rhymes, and even art. Over the years, a folklore story is told and retold. People living in different times and different places sometimes change the stories to fit their own shared beliefs.

People often use folklore to explain how the world was created, or how a lake or mountain came to be. We also keep track of our history and our culture’s special heroes through folklore.

Folklore can tell an endless story like “The House That Jack Built.” Folklore can be a tall tale like stories of Paul Bunyan or Mike Fink on the American Frontier. Many folklore tales have a hero, like Hercules, who uses wisdom or strength to overcome great challenges. Folklore can feature magical or supernatural creatures like fairies, dragons, and ghosts.

Folktales from West Africa and those of Native Americans might have a Trickster character, often an animal that is small and smart, but greedy, too. This character stirs up trouble and teaches lessons by tricking others.

Folk traditions are also passed down from parents to their children through the years. These traditions include folk dances, folk music, games, favorite recipes, rituals, and special festivals.

HOW DO WE STUDY FOLKLORE?

People began studying folklore from the past during the 1600s. People who study folklore are known as folklorists. From 1812 to 1815, two brothers, Jacob and Wilhelm Grimm, collected and retold German folktales. Writer Hans Christian Andersen retold many folktales from Denmark. Folklorists try to learn where folktales come from and what things stories from around the world have in common.

Folklore societies preserve folklore for the future. As early as 1905, a folklore society used Thomas Edison's invention, the phonograph, to record folk songs. Today, folklore is saved in written works, preserved on audiotape, and retold in movies.

WHY IS FOLKLORE IMPORTANT?

From the time people first gathered around a campfire and listened to a story, folklore has linked us to our past. Over time, folklore changes to meet the needs of different people living in different times. But folklore carries clues to a culture’s traditions, beliefs, and history for future generations. Let the stories continue!