is the capital of . This sprawling modern city has many ancient monuments. ’s history goes back more than 2,500 years. Because of its age, is often called the . ’s many art treasures and historic buildings make the city an important center of European culture.

“ALL ROADS LEAD TO ”
In ancient times, was the center of a mighty . The empire lasted nearly 500 years, into the ad 400s.

Roman armies conquered the lands that are now , , , , and . The Romans built many roads from to distant parts of their empire. This network of roads led to a saying that “All roads lead to .” The ’s influence is still present. The Romans spread their language, Latin, throughout . Latin is the basis for Italian, French, Spanish, and other European languages. 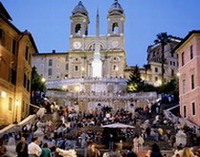 The ancient Romans were great builders. Several of their buildings still stand today. They are among ’s famous landmarks.

The Pantheon is a temple dedicated to the many Roman gods of mythology. The Roman Colosseum is a four-story amphitheater. An amphitheater is like a football stadium. The Colosseum is where Roman citizens once watched gladiators fight to the death. The Roman Forum was the political center of ancient . The senate building and law courts were there, along with shops and religious buildings.

Many artists painted in . The most famous of them is Michelangelo. He lived 500 years ago. Thousands of people visit each year to see his art.

Visitors to the stare in wonder at the beautiful murals that Michelangelo painted on the ceiling of the Sistine Chapel. The murals show scenes from the first book of the Bible, the Book of Genesis.

is an independent country within . It is the smallest country in the world.

Did you know that a wolf is the official symbol for the city of ?

Legend says that an evil king tried to kill twin baby boys called and Remus by throwing them into the . A female wolf found the boys washed ashore. She raised the twins. When the boys grew to be young men, they overthrew the evil king.

then founded the city of on the banks of the . That was over 2,500 years ago.