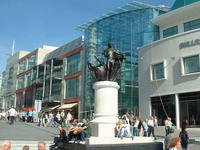 Alabama is often called the Heart of Dixie. Dixie is an old nickname for the Southern United States. No one is sure where the name Dixie comes from. But a song called “Dixie” made the name popular in the 1800s. Alabama has played an important role in the history of the American South.

Alabama became the 22nd state on December 14, 1819. The state takes its name from the Alabama River. The river was named after a Native American tribe that once lived there. They were called the Alibamon people.

The Appalachian Mountains extend into northeastern Alabama. Most of Alabama is rolling hills and prairies. Forests cover much of this land.

Southern Alabama is flatter than the rest of the state. The land becomes swampy near the coast, along the Gulf of Mexico. Southern Alabama has a damp, warm climate. You’ll see Spanish moss hanging from the trees and you might even spot an alligator lurking in a swamp!

Cotton planters helped Alabama grow in the early 1800s. For a long time, cotton was the main crop in Alabama’s economy. It was grown mostly in an area of southern Alabama called the Black Belt. The Black Belt has black, fertile soil that is good for crops.

Large cotton plantations flourished in the Black Belt. The plantations depended on the labor of slaves, who harvested the crop by hand.

The Civil War (1861-1865) ended slavery and the plantation system. But something else destroyed cotton farming. In 1915, a small beetle called the boll weevil came to Alabama. It caused so much damage to cotton crops that farmers began to grow other crops like soybeans and peanuts. They also began to raise cattle and chickens.

CAPITAL OF THE CONFEDERACY

Montgomery is the capital of Alabama. It’s located on the Alabama River in the Black Belt region. But it’s not the state’s biggest city.

Alabama’s biggest city is Birmingham. It’s a manufacturing center. Large mineral deposits are found nearby. Many of these deposits are used in making steel.

Mobile is a busy port near the Gulf of Mexico. French colonists founded Mobile. Many of Mobile’s attractive, old houses and gardens reflect its French past.

Like most Southern states, Alabama was once segregated. That means that black Americans weren’t allowed to mix with white Americans in schools, on buses, and even in restaurants.

In 1955, in Montgomery, a woman named Rosa Parks refused to give her seat on a bus to a white man. She was arrested. For a year, blacks protested by refusing to ride buses in Montgomery. This was the first big protest in the United States that aimed at changing segregation. In 1956, a court ordered an end to segregation on Montgomery buses.

Today in Montgomery you can visit the Civil Rights Memorial. It honors 40 people who died while supporting the civil rights movement.

Have you ever thought about space travel? In Alabama, you can see what it’s like. Huntsville, Alabama, is home to the United States Space and Rocket Center. It has spaceships and a missiles museum. It’s Alabama’s biggest tourist attraction.

It also has Space Camp for kids. At Space Camp, kids spend a week doing what astronauts do—training for space missions! You fly in a simulated (imitation) space shuttle, experience weightlessness, and learn about life in space. It’s fun, but it’s hard work, too.