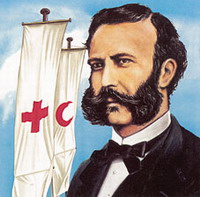 Henri Dunant, at age 30, was a wealthy Swiss banker and financier. His life would probably have continued much as it had except for one fateful day, June 24, 1859, that changed everything.

Dunant had been sent by his government to talk to Napoleon III. He was to discuss a business deal between the Swiss and the French that would benefit both. But Napoleon was not in Paris, he  was on the plain of Solferino about to do battle with the Austrians.

Henri Dunant tried to reach the scene before the battle began, but he was too late. His carriage came to the halt on top of the hill that overlooked the battlefield.

Suddenly trumpets blared, muskets cracked, cannons boomed. The two cavalries charged and the  battle was on. Henri Dunant, as if in a box scat at the theater, sat transfixed. He could see the dust rising, hear the scrams of the injured, the dying. Dunant sat as if in a trance at the horror below him.

But the real horror was later- when he entered the small town after the battle was over. Every house, every building was filled with the mangled, the injured, the dead. Driven by pity at the suffering he saw all around him. Dunant stayed in the town for three days doing everything he could to help.

He was never the same man again. War was barbarous. The world should abolish it.This was not the way to settle differences between nations. And most of all there ought to be a world-wide organization to help people in times of suffering and chaos.

Henri Dunant returned to Switzerland, but in the next few years he became a fanatic on the subject of peace and mercy. He began to travel all over Europe preaching his message. Eventually his business suffered in the effort and he was soon broke. But he persisted.

At the first Geneva Conference, he carried on a one-man assault against war. As a result, the Conference passed the first international law against war- a movement that was to give birth eventually to both League of Nations and the UN.

In 1901, Dunant was awarded the Nobel Peace prize. And thought he was penniless and living in a poor-house, he gave the entire prize to worldwide movement he had founded.

Henri Dunant died in 1910 almost totally forgotten by the world. But Dunant needed no monument to mark his grave.