In 1862, saved a boy from being run over by a train. The boy’s father operated a telegraph machine, which sent coded messages over wire. As thanks, the father taught how to operate the telegraph. then made improvements to the telegraph. He earned money from his inventions.

In 1876, Edison started the first industrial research laboratory at . By then, was partially deaf. He worked very hard. He lived in his laboratory and became rich from his inventions. He was married twice and had six children. But he worked so much that he spent little time with his family.

’s greatest inventions included an improved telephone, the phonograph, the motion-picture camera, and electric storage batteries. He is best remembered for inventing a long-lasting light bulb. 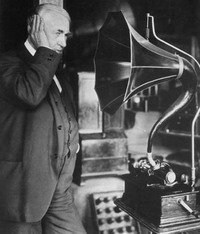 In the 1870s, many inventors were trying to make a practical light bulb. Edison tried hundreds of schemes. Finally he found a filament (thin thread) made of carbon. An electric spark made the filament glow inside a glass tube. Edison’s incandescent lamp was a great success. It burned steadily for more than 40 hours.

Edison wanted people to have electric light in their homes. So he built the first electric power plants.

People liked Edison because he was a down-to-earth man. His favorite saying was, “Genius is 1 percent inspiration and 99 percent perspiration.”