A short history of petroleum

By the early 1900s, the Standard Oil Company of John D. Rockefeller came to control almost all of the American oil industry. With oil over one hundred fifty dollars a barrel, this is may be a good time for a short history of petroleum.

Petroleum has been important since ancient times. The Greek historian Herodotus told of its use in the form of pitch for building and road making in the ancient city of Babylon in present-day Iraq.

In Latin, the name means "rock oil". Petroleum is a fossil fuel. The liquid comes from the remains of plants and animals that died millions of years ago. These remains were buried deep below levels of rock overtime and under great pressure.

This geological process created complex molecules of hydrogen and carbon. Oil can also contain other elements. Crude oil, or unprocessed petroleum, is called sour when it contains a lot of sulfur, an impurity, Sour crude requires more refining than sweet crude, which is low sulfur and, as a result, often more valuable.

The modern history of oil started in the middle of the eighteen hundreds. At that time, a method was found to make kerosene fuel from petroleum. This kind of fuel became popular for heating and lighting. 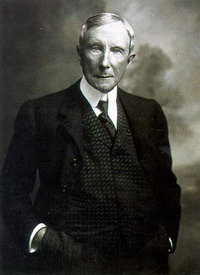 Standard Oil and other companies that it owned performed every level of production from drilling to refining to transporting and selling. But in its efforts to grow, Standard Oil was strongly criticized for crushing smaller competitors.

Today, ExxonMobil, ConocoPhillips and Chevron are some of the companies whose roots go back to the breakup of Standard Oil. They are among the largest publicly traded companies in the world.