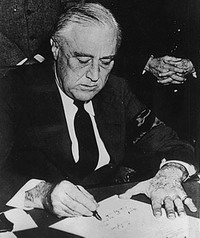 What do the presidents Franklin D. Roosevelt, John F. Kennedy, and Bill Clinton all have in common? Answer: They all were elected to office as candidates of the Democratic Party.

WHAT IS A POLITICAL PARTY?

WHO STARTED THE DEMOCRATIC PARTY?

The Democratic Party is almost as old as the United States. The roots of the party go back to the days of Thomas Jefferson, America’s third president. Jefferson believed that common people should control the government. He also wanted a small government that acted cautiously and mostly stayed out of people’s lives.

During the 1790s, Jefferson helped form a political party to support his ideas. It became known as the Democratic-Republican Party. By 1830, the party’s name had been shortened to the Democratic Party. Five of the country’s first eight presidents were Democrats.

Jefferson’s main rival, John Adams, was the country’s second president. Adams wanted a powerful and active government controlled by the best-educated people. Adams belonged to the Federalist Party, which supported his views. The Federalist Party was important for a time, but it lost popularity in the early 1800s and disappeared.

THE DEMOCRATIC PARTY AND SLAVERY

The Civil War broke out over slavery, pitting Northern states against Southern states. Republican president Abraham Lincoln led the North to victory in 1865. The war weakened the Democratic Party everywhere except in the South. Only one Democrat was elected president between 1856 and 1912.

THE PARTY OF BIG GOVERNMENT

In the early 1900s, the Democratic Party went through a change. Democrats began to support government programs to help common people, such as factory workers, farmers, immigrants, and the poor. They wanted to limit the power and wealth of the rich. Democrats wanted a bigger, more active government to accomplish these things.

In the 1930s and 1940s, President Franklin D. Roosevelt brought the Democratic Party to the peak of its power. The Democrats created many new programs. They built Social Security and other programs to help people in need. Between 1932 and 1968, the Democrats won seven of nine presidential elections. They controlled the U.S. Congress, where laws are made.

Today, the Democrats still favor government action to help the poor and the less fortunate. They support greater rights for women and minorities. But the Democrats are not as powerful as they once were. In particular, they have lost the popularity they once had in the South.