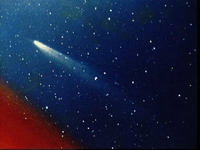 Comets are thought to be made from the earliest materials of the solar system. When the sun first formed, it blew lighter material (gases, dust) out into space. Some of this material (mainly gas) condensed to form the outer planets (Jupiter, Saturn, Uranus, Neptune) and some remains in orbit far from the sun in two areas:

·   Oort Cloud - a sphere about 50,000 AUs from the sun; named after the Dutch astronomer Jan Oort who proposed it

The Path of a Comet

Comets are thought to orbit the sun in either the Oort cloud or Kuiper belt. When another star passes by the solar system, its gravity pushes the Oort cloud and/or Kuiper belt and causes comets to descend toward the sun in a highly elliptical orbit with the sun at one focus of the ellipse. Comets can have short period orbits (less than 200 years such as Halley's comet) or long period orbits (greater than 200 years such as comet Hale-Bopp).

As the comet passes within six AUs of the sun, the ice begins to go directly from the solid to the gas state (sublimation) much like the way fog is formed. When the ice sublimes, the gas and dust particles flow away f 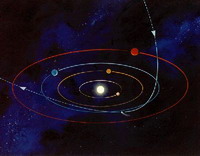 rom the sun to form the comet's tail.

Parts of a Comet

As a comet approaches the sun, it warms up. During this warming, you can observe several distinct parts: 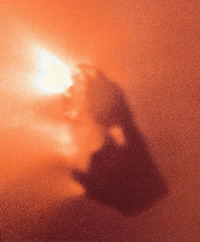 The coma is a halo of evaporated gas (water vapor, ammonia, carbon dioxide) and dust that surrounds the nucleus. The coma is made as the comet warms up and is often 1,000 times larger than the nucleus. It can even become as big as Jupiter or Saturn (100,000 kilometers). The coma and nucleus together form the head of the comet.

Comets often have a second tail called an ion tail (also called the plasma or gas tail). The ion tail is made of electrically charged gas molecules (carbon dioxide, nitrogen, water) that are pushed away from the nucleus by the solar wind. Sometimes, the gas tail disappears and later reappears when the comet crosses a boundary where direction of the sun's magnetic field is reversed

As comets pass through the inner solar system, they can be broken into pieces by Jupiter's gravity. Comet Shoemaker-Levy 9 was broken into 20 pieces, each of which collided with Jupiter in one of the most spectacular examples of interplanetary impacts in recorded history. 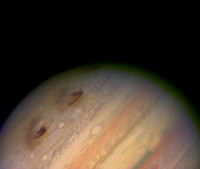 Here is a Hubble Space Telescope image of Jupiter after pieces of comet Shoemaker-Levy 9 hit the planet. The dark spots are the impact sites.

Recently, comet LINEAR was also broken into fragments by the sun's gravity as it passed the sun.

Many comets are actually discovered by amateur astronomers. To look for comets, here are things to keep in mind:

·   Go to a place where there are few lights.

·   Look toward the east about 30 minutes before sunrise or to the west about 20 minutes after sunset because comets are often spotted by their tails.

·   Sweep the sky slowly near the horizon.

Comets will appear as small, fuzzy objects. This type of observing takes discipline, long hours and patience. On average, comet hunters spend several hundred hours of observing time to find a new comet. However, comets are named after their discoverers, so many people think it is worth the effort. For a discussion of comet hunting, consult The Sky: a User’s Guide by David H. Levy, who has discovered several comets including comet Shoemaker-Levy 9 that hit Jupiter.