Computer, machine that performs tasks, such as calculations or electronic communication, under the control of a set of instructions called a program. Programs usually reside within the computer and are retrieved and processed by the computer’s electronics. The program results are stored or routed to output devices, such as video display monitors or printers. Computers perform a wide variety of activities reliably, accurately, and quickly.

The history of computing began with an analog machine. In 1623 German scientist Wilhelm Schikard invented a machine that used 11 complete and 6 incomplete sprocketed wheels that could add, and with the aid of logarithm tables, multiply and divide.

French philosopher, mathematician, and physicist Blaise Pascal invented a machine in 1642 that added and subtracted, automatically carrying and borrowing digits from column to column. Pascal built 50 copies of his machine, but most served as curiosities in parlors of the wealthy. Seventeenth-century German mathematician Gottfried Leibniz designed a special gearing system to enable multiplication on Pascal’s machine. 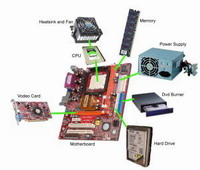 In the early 19th century French inventor Joseph-Marie Jacquard devised a specialized type of computer: a silk loom. Jacquard’s loom used punched cards to program patterns that helped the loom create woven fabrics. Although Jacquard was rewarded and admired by French emperor Napoleon I for his work, he fled for his life from the city of Lyon pursued by weavers who feared their jobs were in jeopardy due to Jacquard’s invention. The loom prevailed, however: When Jacquard died, more than 30,000 of his looms existed in Lyon. The looms are still used today, especially in the manufacture of fine furniture fabrics.

Another early mechanical computer was the Difference Engine, designed in the early 1820s by British mathematician and scientist Charles Babbage.

Although never completed by Babbage, the Difference Engine was intended to be a machine with a 20-decimal capacity that could solve mathematical problems. Babbage also made plans for another machine, the Analytical Engine, considered the mechanical precursor of the modern computer. The Analytical Engine was designed to perform all arithmetic operations efficiently; however, Babbage’s lack of political skills kept him from obtaining the approval and funds to build it.

Augusta Ada Byron, countess of Lovelace, was a personal friend and student of Babbage. She was the daughter of the famous poet Lord Byron and one of only a few woman mathematicians of her time. She prepared extensive notes concerning Babbage’s ideas and the Analytical Engine. Lovelace’s conceptual programs for the machine led to the naming of a programming language (Ada) in her honor. Although the Analytical Engine was never built, its key concepts, such as the capacity to store instructions, the use of punched cards as a primitive memory, and the ability to print, can be found in many modern computers.

People use computers in many ways. In business, computers track inventories with bar codes and scanners, check the credit status of customers, and transfer funds electronically. In homes, tiny computers embedded in the electronic circuitry of most appliances control the indoor temperature, operate home security systems, tell the time, and turn videocassette recorders (VCRs) on and off. Computers in automobiles regulate the flow of fuel, thereby increasing gas mileage, and are used in anti-theft systems. Computers also entertain, creating digitized sound on stereo systems or computer-animated features from a digitally encoded laser disc. Computer programs, or applications, exist to aid every level of education, from programs that teach simple addition or sentence construction to programs that teach advanced calculus.

Educators use computers to track grades and communicate with students; with computer-controlled projection units, they can add graphics, sound, and animation to their communications (see Computer-Aided Instruction). Computers are used extensively in scientific research to solve mathematical problems, investigate complicated data, or model systems that are too costly or impractical to build, such as testing the air flow around the next generation of aircraft. The military employs computers in sophisticated communications to encode and unscramble messages, and to keep track of personnel and supplies.

Computers can be either digital or analog. Virtually all modern computers are digital. Digital refers to the processes in computers that manipulate binary numbers (0s or 1s), which represent switches that are turned on or off by electrical current. A bit can have the value 0 or the value 1, but nothing in between 0 and 1. Analog refers to circuits or numerical values that have a continuous range. Both 0 and 1 can be represented by analog computers, but so can 0.5, 1.5, or a number like p (approximately 3.14). 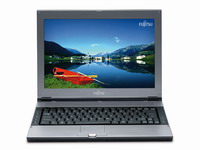 A desk lamp can serve as an example of the difference between analog and digital. If the lamp has a simple on/off switch, then the lamp system is digital, because the lamp either produces light at a given moment or it does not. If a dimmer replaces the on/off switch, then the lamp is analog, because the amount of light can vary continuously from on to off and all intensities in between.

Analog computer systems were the first type to be produced. A popular analog computer used in the 20th century was the slide rule. To perform calculations with a slide rule, the user slides a narrow, gauged wooden strip inside a rulerlike holder. Because the sliding is continuous and there is no mechanism to stop at any exact values, the slide rule is analog. New interest has been shown recently in analog computers, particularly in areas such as neural networks. These are specialized computer designs that attempt to mimic neurons of the brain. They can be built to respond to continuous electrical signals. Most modern computers, however, are digital machines whose components have a finite number of states—for example, the 0 or 1, or on or off bits. These bits can be combined to denote information such as numbers, letters, graphics, sound, and program instructions.

Computers exist in a wide range of sizes and power. The smallest are embedded within the circuitry of appliances, such as televisions and wristwatches. These computers are typically preprogrammed for a specific task, such as tuning to a particular television frequency, delivering doses of medicine, or keeping accurate time. They generally are “hard-wired”—that is, their programs are represented as circuits that cannot be reprogrammed.

Programmable computers vary enormously in their computational power, speed, memory, and physical size. Some small computers can be held in one hand and are called personal digital assistants (PDAs). They are used as notepads, scheduling systems, and address books; if equipped with a cellular phone, they can connect to worldwide computer networks to exchange information regardless of location. Hand-held game devices are also examples of small computers.

Portable laptop and notebook computers and desktop PCs are typically used in businesses and at home to communicate on computer networks, for word processing, to track finances, and for entertainment. They have large amounts of internal memory to store hundreds of programs and documents. They are equipped with a keyboard; a mouse, trackball, or other pointing device; and a video display monitor or liquid crystal display (LCD) to display information.

Laptop and notebook computers usually have hardware and software similar to PCs, but they are more compact and have flat, lightweight LCDs instead of television-like video display monitors. Most sources consider the terms “laptop” and “notebook” synonymous.

Workstations are similar to personal computers but have greater memory and more extensive mathematical abilities, and they are connected to other workstations or personal computers to exchange data. They are typically found in scientific, industrial, and business environments—especially financial ones, such as stock exchanges—that require complex and fast computations.

Mainframe computers have more memory, speed, and capabilities than workstations and are usually shared by multiple users through a series of interconnected computers. They control businesses and industrial facilities and are used for scientific research. The most powerful mainframe computers, called supercomputers, process complex and time-consuming calculations, such as those used to create weather predictions. Large businesses, scientific institutions, and the military use them. Some supercomputers have many sets of CPUs. These computers break a task into small pieces, and each CPU processes a portion of the task to increase overall speed and efficiency. Such computers are called parallel processors. As computers have increased in sophistication, the boundaries between the various types have become less rigid.

The performance of various tasks and types of computing have also moved from one type of computer to another. For example, networked PCs can work together on a given task in a version of parallel processing known as distributed computing.