Flower, reproductive organ of most seed-bearing plants. Flowers carry out the multiple roles of sexual reproduction, seed development, and fruit production. Many plants produce highly visible flowers that have a distinctive size, color, or fragrance. Almost everyone is familiar with beautiful flowers such as the blossoms of roses, orchids, and tulips. But many plants—including oaks, beeches, maples, and grasses—have small, green or gray flowers that typically go unnoticed

Whether eye-catching or inconspicuous, all flowers produce the male or female sex cells required for sexual reproduction.

Flowers are also the site of fertilization, which is the union of a male and female sex cell to produce a fertilized egg. The fertilized egg then develops into an embryonic (immature) plant, which forms part of the developing seed. Neighboring structures of the flower enclose the seed and mature into a fruit.

Flowering plants are more widespread than any other group of plants. They bloom on every continent, from the bogs and marshes of the Arctic tundra to the barren soils of . Deserts, grasslands, rainforests, and other biomes display distinctive flower species. Even streams, rivers, lakes, and swamps are home to many flowering plants.

In their diverse environments, flowers have evolved to become irreplaceable participants in the complex, interdependent communities of organisms that make up ecosystems. The seeds or fruits that flowers produce are food sources for many animals, large and small. In addition, many insects, bats, hummingbirds, and small mammals feed on nectar, a sweet liquid produced by many flowers, or on flower products known as pollen grains. The animals that eat flowers, seeds, and fruits are prey for other animals—lizards, frogs, salamanders, and fish, for example—which in turn are devoured by yet other animals, such as owls and snakes. Thus, flowers provide a bountiful feast that sustains an intricate web of predators and prey. 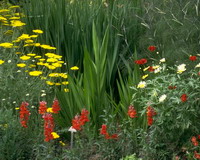 Flowers play diverse roles in the lives of humans. Wildflowers of every hue brighten the landscape, and the attractive shapes and colors of cultivated flowers beautify homes, parks, and roadsides. The fleshy fruits that flowers produce, such as apples, grapes, strawberries, and oranges, are eaten worldwide, as are such hard-shelled fruits as pecans and other nuts. Flowers also produce wheat, rice, oats, and corn—the grains that are dietary mainstays throughout the world. People even eat unopened flowers, such as those of broccoli and cauliflower, which are popular vegetables. Natural dyes come from flowers, and fragrant flowers, such as jasmine and damask rose, are harvested for their oils and made into perfumes. Certain flowers, such as red clover blossoms, are collected for their medicinal properties, and edible flowers, such as nasturtiums, add color and flavor to a variety of dishes. Flowers also are used to symbolize emotions, as is evidenced by their use from ancient times in significant rituals, such as weddings and funerals.

Flowers typically are composed of four parts, or whorls, arranged in concentric rings attached to the tip of the stem. From innermost to outermost, these whorls are the (1) pistil, (2) stamens, (3) petals, and (4) sepals.

The innermost whorl, located in the center of the flower, is the female reproductive structure, or pistil. Often vase-shaped, the pistil consists of three parts: the stigma, the style, and the ovary. The stigma, a slightly flared and sticky structure at the top of the pistil, functions by trapping pollen grains, the structures that give rise to the sperm cells necessary for fertilization. The style is a narrow stalk that supports the stigma. The style rises from the ovary, a slightly swollen structure seated at the base of the flower. Depending on the species, the ovary contains one or more ovules, each of which holds one egg cell. After fertilization, the ovules develop into seeds, while the ovary enlarges into the fruit. If a flower has only one ovule, the fruit will contain one seed, as in a peach. The fruit of a flower with many ovules, such as a tomato, will have many seeds. An ovary that contains one or more ovules also is called a carpel, and a pistil may be composed of one to several carpels.

The next whorl consists of the male reproductive structures, several to many stamens arranged around the pistil. A stamen consists of a slender stalk called the filament, which supports the anther, a tiny compartment where pollen forms. When a flower is still an immature, unopened bud, the filaments are short and serve to transport nutrients to the developing pollen. As the flower opens, the filaments lengthen and hold the anthers higher in the flower, where the pollen grains are more likely to be picked up by visiting animals, wind, or in the case of some aquatic plants, by water. The animals, wind, or water might then carry the pollen to the stigma of an appropriate flower. The placement of pollen on the stigma is called pollination. Pollination initiates the process of fertilization.

Petals, the next whorl, surround the stamens and collectively are termed the corolla. Many petals have bright colors, which attract animals that carry out pollination, collectively termed pollinators. Three groups of pigments—alone or in combination—produce a veritable rainbow of petal colors: anthocyanins yield shades of violet, blue, and red; betalains create reds; and carotenoids produce yellows and orange. Petal color can be modified in several ways. Texture, for example, can play a role in the overall effect—a smooth petal is shiny, while a rough one appears velvety. If cells inside the petal are filled with starch, they create a white layer that makes pigments appear brighter. Petals with flat air spaces between cells shimmer iridescently.

In some flowers, the pigments form distinct patterns, invisible to humans but visible to bees, who can see ultraviolet light. Like the landing strips of an airport, these patterns, called nectar guides, direct bees to the nectar within the flower. Nectar is made in specialized glands located at or near the petal’s base. Some flowers secrete copious amounts of nectar and attract big pollinators with large appetites, such as bats. Other flowers, particularly those that depend on wind or water to transport their pollen, may secrete little or no nectar. The petals of many species also are the source of the fragrances that attract pollinators. In these species, the petals house tiny glands that produce essential, or volatile, oils that vaporize easily, often releasing a distinctive aroma. One flower can make dozens of different essential oils, which mingle to yield the flower’s unique fragrance.

The sepals, the outermost whorl, together are called the calyx. In the flower bud, the sepals tightly enclose and protect the petals, stamens, and pistil from rain or insects. The sepals unfurl as the flower opens and often resemble small green leaves at the flower’s base. In some flowers, the sepals are colorful and work with the petals to attract pollinators.

Like virtually all forms in nature, flowers display many variations in their structure. Most flowers have all four whorls—pistil, stamens, petals, and sepals. Botanists call these complete flowers. But some flowers are incomplete, meaning they lack one or more whorls. Incomplete flowers are most common in plants whose pollen is dispersed by the wind or water. Since these flowers do not need to attract pollinators, most have no petals, and some even lack sepals. Certain wind-pollinated flowers do have small sepals and petals that create eddies in the wind, directing pollen to swirl around and settle on the flower. In still other flowers, the petals and sepals are fused into structures called a floral tube.

Flowers that lack either stamens or a pistil are said to be imperfect. The petal-like rays on the edge of a sunflower, for example, are actually tiny, imperfect flowers that lack stamens. Imperfect flowers can still function in sexual reproduction. A flower that lacks a pistil but has stamens produces pollen, and a flower with a pistil but no stamens provides ovules and can develop into fruits and seeds. Flowers that have only stamens are termed staminate, and flowers that have only a pistil are called pistillate.

Other variations are found in the types of stems that support flowers. In some species, flowers are attached to only one main stem, called the peduncle. In others, flowers are attached to smaller stems, called pedicels, that branch from the peduncle. The peduncle and pedicels orient a flower so that its pollinator can reach it. In the morning glory, for example, pedicels hold the flowers in a horizontal position. This enables their hummingbird pollinators to feed since they do not crawl into the flower as other pollinators do, but hover near the flower and lick the nectar with their long tongues. Scientists assign specific terms to the different flower and stem arrangements to assist in the precise identification of a flower. A plant with just one flower at the tip of the peduncle—a tulip, for example—is termed solitary. In a spike, such as sage, flowers are attached to the sides of the peduncle. 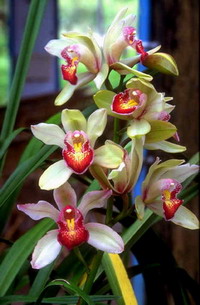 Sometimes flowers are grouped together in a cluster called an inflorescence. In an indeterminate inflorescence, the lower flowers bloom first, and blooming proceeds over a period of days from the bottom to the top of the peduncle or pedicels. As long as light, water, temperature, and nutrients are favorable, the tip of the peduncle or pedicel continues to add new buds. There are several types of indeterminate inflorescences. These include the raceme, formed by a series of pedicels that emerge from the peduncle, as in snapdragons and lupines; and the panicle, in which the series of pedicels branches and rebranches, as in lilac.

In determinate inflorescences, called cymes, the peduncle is capped by a flower bud, which prevents the stem from elongating and adding more flowers. However, new flower buds appear on side pedicels that form below the central flower, and the flowers bloom from the top to the bottom of the pedicels. Flowers that bloom in cymes include chickweed and phlox.

The life cycle of a flowering plant begins when the seed germinates. It progresses through the growth of roots, stems, and leaves; formation of flower buds; pollination and fertilization; and seed and fruit development. The life cycle ends with senescence, or old age, and death. Depending on the species, the life cycle of a plant may last one, two, or many years. Plants called annuals carry out their life cycle within one year. Biennial plants live for two years: The first year they produce leaves, and in the second year they produce flowers and fruits and then die. Perennial plants live for more than one year. Some perennials bloom every year, while others, like agave, live for years without flowering and then in a few weeks produce thousands of flowers, fruits, and seeds before dying.

Whatever the life cycle, most plants flower in response to certain cues. A number of factors influence the timing of flowering. The age of the plant is critical—most plants must be at least one or two weeks old before they bloom; presumably they need this time to accumulate the energy reserves required for flowering. The number of hours of darkness is another factor that influences flowering. Many species bloom only when the night is just the right length—a phenomenon called photoperiodism. Poinsettias, for example, flower in winter when the nights are long, while spinach blooms when the nights are short—late spring through late summer. Temperature, light intensity, and moisture also affect the time of flowering. In the desert, for example, heavy rains that follow a long dry period often trigger flowers to bloom.