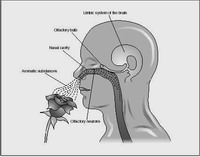 Here’s a question: If you lost your nose, would you still be able to smell? Believe it or not, the answer is yes! Even though the nose is the organ of smell, it’s only the outside part. There’s an inside part that you can’t see. That’s where the smelling gets done.

There are all kinds of noses in the animal world: big or small, flat or round, and long or short. In people, what we call the nose is the formation of bone, cartilage (tough tissue), and skin on the front of the face.

The nose has two openings called nostrils. They allow air to come in and go out. When that happens, the nose collects the molecules of substances that cause odors.

The nose has other functions, too. The stiff hairs in the nostrils help keep out dust, dirt, and insects that you might take in when you breathe. Once inside the nose, the air you breathe is warmed and moistened in the big nasal cavity before going to the lungs. The nasal cavity is the big space behind your nostrils. It’s what gets stuffed up and swollen when you have a cold.

The size, shape, and health of your nose help determine the way your voice sounds. Pinch your nose shut and talk. Can you hear the difference?

Smell is the detection of odors. It’s one of the five senses. The others are touch, taste, sight, and hearing.

Smelling takes place deep inside the nasal cavity. That’s because there are nerve endings called olfactory nerves located there. You actually smell stuff somewhere roughly between your eyes!

When a molecule that represents an odor hits the olfactory nerves, these nerve endings send a signal to your brain. The brain then determines what the smell is, and you recognize it. Most people can detect about 10,000 different odors! Unfortunately, one of them is dirty socks.

Smell plays a big part in the sense of taste, too. The taste buds can only detect four tastes: sweet, sour, salty, and bitter. Your sense of smell adds to these tastes. That’s why food is so rich and varied in taste. That’s also why if your nose is blocked up, your taste buds don’t work well either.

For most animals, the nose and sense of smell are crucial to survival. They help animals find food. They can help animals tell friends from enemies and find mates.

Many animals have noses with extra talents. The elephant’s trunk is long like an arm and useful like a hand. It’s a trumpet when an elephant calls, and it’s a hose that allows an elephant to drink or give itself a shower.

A young salmon will travel thousands of miles downriver and into the ocean to live. Years later, it can use its sense of smell to return to the exact place it was born. Its ability to smell is that good! Can you imagine finding your way home from school only using your nose?