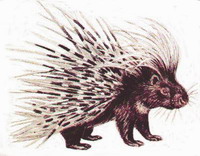 Hair is one of the things unique to the mammal world. Dogs, cats, lions, squirrels, and seals—they all have hair. So do humans. Hair grows only on mammals.

Hair is an extension of your skin. It’s made up of old skin cells that are filled with a protein called keratin. Pack a lot of these cells in a long, narrow line and you have a hair. Keratin is used to make fingernails, claws, scales, beaks, feathers, and other skin attachments, too.

Each hair grows inside its own follicle. A follicle is a little pit in your skin. And hair grows at the root, not at the tip. That means that new hair is added to the bottom, or root, of the hair and the old hair gets pushed up. That’s why when dyed hair grows out, the dyed part gets pushed farther from the scalp and the real hair color appears at the bottom.

In humans, hair comes naturally in black, brown, blonde, red, white, and various shades in-between. In animals, there are even more varieties and patterns of hair color. Markings such as a tiger’s stripes and a leopard’s spots come from differences in hair color. They are often how we quickly identify these animals.

Yes! Each hair follicle has a tiny muscle called the arrector pili attached to it. When you’re cold or when you’re scared, the muscle pulls the hair up, making your hair stand on end. That’s what goose bumps are: the muscles in your hair follicle pulling tight!

Have you ever seen a cat hiss and arch its back? It’s the same thing. In animals, the raised hair makes the animal look bigger and scarier than normal so that a would-be attacker might run away in fright.

THE JOB OF HAIR

Hair does a lot of other things, too, depending on the animal. When hair is real thick it’s called fur. Fur keeps an animal warm. Some animal fur is even valued by people because it is so warm.

Fur color can help an animal blend into its surroundings, allowing it to hide better. Some animals even change color with the seasons. The arctic fox, for example, is dark in summer but white in winter. This winter coat makes it hard to see the fox in the snow.

Even the spines of a porcupine are modified hairs. Spines are just stiff, sharp hairs that protect the animal when attacked.

Hair also helps animals sense their surroundings. Longer hairs can brush against things to help animals orient their bodies. For example, whiskers are special hairs around the face that help an animal feel its way around in the dark.

In humans, hair’s importance is mainly as decoration. Hair and beards have been a great part of dress and style for both men and women since ancient times. The way kings and queens wore their hair influenced the fashion of the day, the same way that a celebrity hairdo today can start off a hairstyle trend.