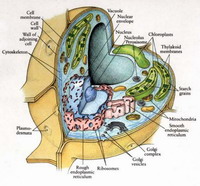 All plants and animals are made of cells. Most cells are much too small to see. It takes millions of cells, for example, to make just one of your fingers. Some tiny creatures, such as bacteria, are made of only one cell.

If you want to see what a cell looks like, you could use a microscope. Or, you could get an egg. A bird’s egg is actually a single, giant cell. The eggs you eat for breakfast come from chickens.

AN EGG IS A CELL

An egg is a very big cell. Take a look at an egg that has been broken into a bowl. One of the first things you see is a yellow center. You call this center the yolk. Biologists call it the nucleus of the cell. Almost all cells have a nucleus.

The genes of the cell are in the nucleus. The genes in the chicken egg tell what the bird will look like. The genes tell the cell how to do its work. Different plants and animals have different genes.

The clear, jelly-like stuff around the nucleus is called cytoplasm. Much of the work of the cell goes on in the cytoplasm. This work keeps plants and animals alive.

A chicken egg is a special kind of cell. It has a hard shell to protect the egg. Most cells are much smaller and do not have a hard shell.

WHAT ARE THE KINDS OF ANIMAL CELLS?

There are many kinds of animal cells. The different parts of your body, such as your muscles, skin, and brain, are made up of different types of cells. The cells perform different functions. Muscle cells help you move. Skin cells keep harmful things from getting into your body. Brain cells allow you to think.

Animal cells come in all sizes. Some are so small that 10,000 of them would be only as wide as a single hair. The ostrich egg is a cell that is as big as a baseball.

Animal cells come in many different shapes. Skin cells are flat. Red blood cells are round like wheels. Muscle cells are long and thin. Nerve cells have long arms and look like octopuses.

Cells have a kind of framework. The framework is called a cytoskeleton. The cytoskeleton gives an animal cell its shape. It holds the insides of the cell in place.

THE INSIDES OF ANIMAL CELLS

Cells have organs just like you have organs. The organs of a cell are called organelles. Organelles do all the things a cell needs to stay alive and to perform its function in the body.

Each type of organelle has a different job. The nucleus is the organelle that holds the genes. The genes carry a code that tells the cell what to do. Genes tell a cell when to divide.

THE INSIDES OF PLANT CELLS

Chloroplasts are organelles that absorb sunlight and use its energy to make food for the cell. The job that chloroplasts do is called photosynthesis.

The central vacuole stores water filled with salts, sugars, and other nutrients. The vacuole swells up when it’s full of this water. The full vacuole gives plants sturdy stems and plump leaves and flowers. Without enough water inside, the cells collapse and the plant wilts. In flowers, the material in the vacuole gives the flower its color. The central vacuole also collects plant wastes.

The strong cell wall gives a plant cell its rigid shape. The wall lets the central vacuole swell up without bursting the cell.

HOW DO CELLS MULTIPLY?

All cells of living things come from other cells. They come from cells that divide.

There are two steps in cell division for plants and animals. First, the nucleus divides in two. Then, the cytoplasm divides and the cell splits into two cells, each with its own nucleus.

There are two ways a cell can divide. The nucleus of most cells divides by a process called mitosis. Mitosis makes ordinary cells such as skin or blood cells. The two cells produced by mitosis are like identical twins. Each has a full set of genes.

The nucleus of a sex cell divides by a different process called meiosis. Cells produced by meiosis have only a half set of genes. These sex cells, such as sperm and egg cells, can together produce whole new animals. When a sperm fertilizes (combines with) an egg, the new cell has a full set of genes. Half of the genes come from the father’s sperm cell and half from the mother’s egg cell. That’s how babies get genes from both parents.