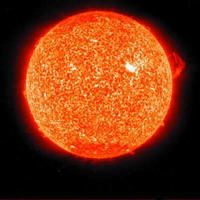 THE SUN IS A STAR

The Sun is a star—a ball of hot, glowing gas. It does not have any solid parts. It is made up mostly of hydrogen gas and helium gas.

The Sun is huge compared with Earth. If the Sun were hollow, a million Earths could fit inside it. The Sun looks small only because it is far away. The average distance from Earth to the Sun is 93 million miles (150 million kilometers). You would have to go around the world more than 3,700 times in order to travel that far on Earth.

The force of Earth’s gravity holds you on the ground. The Sun’s gravity holds Earth and the other planets in their orbits. It holds asteroids, comets, and dust in orbit.

The Sun is one of about 400 billion stars in the Milky Way Galaxy. A galaxy is a large group of stars. The Sun and all the other stars orbit the center of the Milky Way.

ENERGY FROM THE SUN

Almost all the energy on Earth comes from the Sun. Heat from the Sun makes Earth warm enough for life. Plants use the Sun’s energy to live and grow. Plants give off a gas called oxygen. Animals eat the plants and breathe the oxygen. Animals need plants in order to live, and plants need the Sun.

You use plants to make heat and energy. You can burn wood from trees. You can burn fossil fuels called coal, gas, and oil. Fossil fuels formed deep underground from plants and animals that died millions of years ago.

The Sun’s energy can also do harm. Too much sunlight can burn your skin, causing sunburn. Harmful rays from the Sun can also cause a disease called skin cancer. Looking right at the Sun can harm your eyes. You need to be careful of the Sun.

HOW DID THE SUN FORM?

Astronomers believe our solar system formed about 4.6 billion years ago from a swirling cloud of dust and gas. The Sun formed first at the center of the cloud. Then the planets formed from dust and gas going around the Sun.

Someday the Sun will burn out. It will use up all the fuel in its core. You don’t need to worry. Astronomers say that the fuel will last several billion more years.