A hurricane is coming! Boards are nailed over big store windows. Families pack their cars and leave town. A hurricane is a powerful storm with pouring rains and strong winds. Hurricanes can do a lot of damage. They cause floods. They blow down trees. Windows break and roofs fly off of houses.

WHERE DO HURRICANES COME FROM?

Hurricanes start over the ocean. They form over warm water near the equator. The equator is an imaginary line that goes around the middle of the planet.

Some hurricanes start in the North Atlantic Ocean, the Caribbean Sea, and the . These hurricanes can strike the East Coast or of the .

Hurricanes generally do not hit the West Coast, and rarely make it as far north as . In the western , hurricanes are called typhoons. Hurricanes near and are called tropical cyclones.

The winds of a hurricane blow in a huge circle. There is a calm place called the eye in the center of the circle. All around the eye are thick, tall clouds. Heavy rain pours down from these clouds.

Hurricanes move across the water. They grow stronger if they stay over warm water. Some hurricanes head for land. Hurricanes can do a lot of damage if they come up on land. But hurricanes grow weaker the farther inland they go. They also grow weaker over cold water.

HOW STRONG ARE HURRICANES? 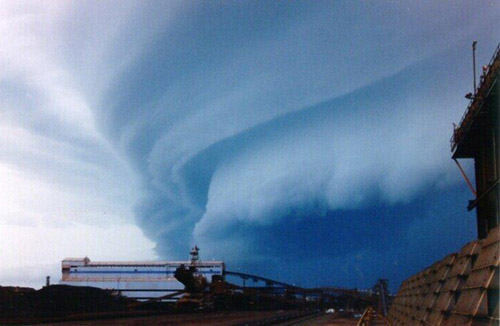 The strongest hurricane of the 20th century was Hurricane Gilbert. It hit the of and parts of in 1988. Gilbert had winds that gusted up to 218 miles per hour (350 kilometers per hour).

CAN HURRICANES BE PREDICTED?

Meteorologists watch for hurricanes at sea during summer and autumn. When a hurricane forms out in the ocean they watch it very carefully. They use radar, weather satellites, and instruments in the sea. They try to figure out which way the hurricane is traveling. Sometimes special airplanes fly into the hurricane to make measurements.