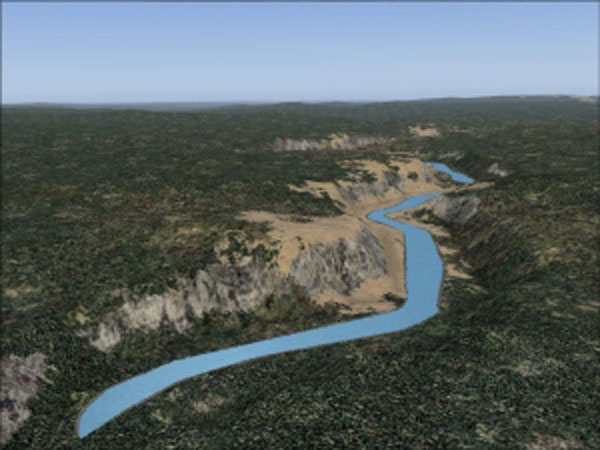 Nile, longest river in the world, located in northeastern Africa. From its principal source, Lake Victoria, in east central Africa, the Nile flows north through Uganda, Sudan, and Egypt to the Mediterranean Sea, a distance of 5584 km (3470 mi). From its remotest headstream in Burundi, the river is 6,695 km (4,160 mi) long. The river basin covers an area of more than 2.8 million sq km (1.1 million sq mi).

On leaving Lake Victoria near the now-flooded Ripon Falls, this section of the Nile, called the Victoria Nile, flows northwest for about 500 km (about 300 mi) through Lake Kyoga and then over rapids between rocky walls, until it enters Lake Albert.

Leaving the northern end of Lake Albert as the Albert Nile, it flows through northern Uganda, and in Sudan becomes the Baḩr al Jabal. In south central Sudan the river flows sluggishly through the vast, swampy As Sudd. This unnavigable barrier has historically separated the Arab-dominated regions of the north from the black African regions of the south. At its junction with the Baḩr al Ghazāl, which is fed by numerous tributaries, the river becomes the White Nile (Baḩr al Abyaḑ).

At the Sudanese capital, Khartoum, the White Nile is joined by the Blue Nile (Baḩr al Azraq), which flows about 1370 km (about 850 mi) from its source, Lake T’ana in the Ethiopian highlands, where it is known as the Abbai. Northeast of Khartoum, the Nile is joined by the ‘Aţbarah, the last tributary to feed the river, and then makes an S-shaped bend through the Nubian Desert. Downstream from Khartoum, the Nile passes through six cataracts (waterfalls), five in Sudan and one in Egypt, near Aswān. Separating into the Rosetta and Damietta branches north of the Egyptian capital, Cairo, the Nile enters the Mediterranean Sea through a 250 km- (160 mi-) wide delta.

The landscape along the river varies from rain forests and mountains in the south to savannas and swamps in southern Sudan to barren deserts in the north. Fish found in the Nile include Nile perch and tilapia. Among wildlife, hippopotamuses are common in the upper Nile, while crocodiles are found throughout the river’s length.