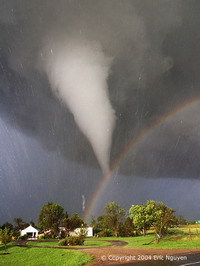 You need to take cover if you ever see a dark cloud that is shaped like a funnel and pointed toward the ground. Warn people that you have seen a tornado nearby. Tornadoes are powerful, swirling winds. Tornadoes can tear roofs off of houses. They can smash brick buildings. Tornadoes can pick up cars and trucks. People can be badly hurt or killed by flying wood, glass, and other things blowing around in a tornado.

WHERE DO TORNADOES COME FROM?

Tornadoes come from big thunderstorms. Tornadoes drop down from the bottoms of storm clouds. Tornado winds blow in a circle. You can’t normally see wind, but you can often see a tornado because its strong winds pick up dust and dirt.

A tornado looks like a big, dark funnel coming from the bottom of a storm cloud. Some tornadoes look like a swinging elephant’s trunk. They sound like a freight train going by. Tornadoes cause damage when the bottom of the funnel touches the ground.

HOW LARGE AND FAST ARE TORNADOES?

Tornadoes can be huge. The biggest tornadoes are almost 1 mile (almost 2 kilometers) across. The average tornado is about 160 feet (about 50 meters) across.

Sometimes a tornado almost stands still in one place, but tornadoes usually move. They can move forward at speeds up to 70 miles per hour (110 kilometers per hour).

HOW POWERFUL ARE TORNADOES? 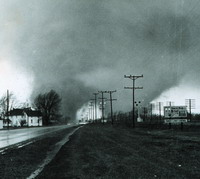 It is hard to study tornadoes. Scientists never know quite when or where they will appear, and they move fast. In 1971, a scientist named Theodore Fujita made up a scale to tell how powerful a tornado is. His Fujita scale ranks tornadoes by how much damage they do. The scale goes from F0 to F5. Weak tornadoes are F0 and F1. Weak tornadoes may damage chimneys and break tree branches. Powerful F5 tornadoes can pick up houses off the ground and strip the bark off of trees.

ARE THERE TORNADOES ALL OVER THE WORLD?

Tornadoes can form anywhere, but they are more common in some places than in others. The gets the most tornadoes. also gets many tornadoes. There are more tornadoes in spring than in any other season.