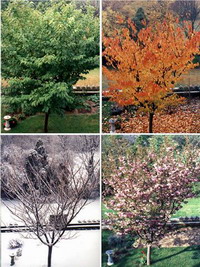 Spring flowers, summer heat, autumn leaves, and winter snow. These are familiar images of the four seasons. Seasons are not the same everywhere. But for people around the world, the changing seasons help mark the passing of the year.

WHY ARE THERE SEASONS?

We have seasons because Earth is tilted! Earth is tilted on its axis as it orbits around the Sun. The axis is the imaginary line that runs between the North Pole and the South Pole. Earth rotates around this axis.

When the Northern Hemisphere is tilted toward the Sun, it gets more direct sunlight for more time each day than does the Southern Hemisphere. This makes the days longer in the north. The air and the oceans warm in the sunlight, and the temperature goes up. These are the months of spring and summer.

If Earth wasn’t tilted, the sunlight would be the same all year round. The Sun would rise and set at the same time each day. There would be no seasons. This is what it’s like near the equator, the imaginary line that circles the planet around its middle. Earth’s tilt has only a small effect there, so the seasons change very little.

Have you ever heard of a solstice? There are two solstices every year, one in June and one in December. On about June 21, the North Pole is tilted farther toward the Sun than it is at any other time of the year and the South Pole is tilted farther away from the Sun. The June solstice is the beginning of summer in the Northern Hemisphere. The Northern Hemisphere gets more sunlight on the June solstice than on any other day of the year. On the same day, it’s the beginning of winter and the shortest day of the year in the Southern Hemisphere.

On about December 21, the positions of the North and South poles are reversed. The December solstice marks the beginning of summer in the Southern Hemisphere. That’s why Australians can celebrate Christmas sunbathing on the beach! The same day marks the start of winter in the north.

Two times each year, day and night are the same length all over the world. These days are called the equinoxes. The equinoxes mark the beginnings of spring and fall. They occur on or about March 21 and September 23.

Since ancient times, societies have celebrated the solstices and equinoxes to mark the change of the seasons. Traditionally, crops are planted with the arrival of spring. Many crops are harvested with the onset of fall. Both seasons are greeted around the world with festivals and celebration.