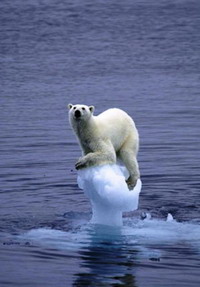 Do you like warm weather? Do you wish it could be warmer still? Be careful what you wish for. The Earth may be moving in that direction. The trend is called global warming.

Not all scientists agree that global warming is happening. Some say it is impossible to know if the climate is changing overall. After all, temperatures vary from day to day and year to year. Most scientists, however, say the trend is up. The warmest days are warmer, the coldest days not as cold. They point out that the ten warmest years of the last century happened after 1980. The three hottest came after 1990. The hottest year on record was 1998.

These scientists say the Earth has warmed up about 1° Fahrenheit (0.6° Celsius) in the last 100 years. The rate of change, they say, is speeding up. A hundred years from now, the Earth may well be as much as ten degrees hotter!

Sunlight brings energy to the Earth. This light turns to heat when it hits the ground. The heat in turn seeps away from the Earth, but the atmosphere slows the heat’s escape. The atmosphere is a layer of air around the planet. It holds in some of the warmth.

The atmosphere is a mixture of many gases. In the last 250 years, this mixture has been changing. The amounts of gases such as methane and carbon dioxide have been rising. These gases trap heat more effectively than other gases. They make the Earth’s atmosphere act like the glass in a greenhouse. It lets sunlight in, but it doesn’t let heat out. As a result, heat is building up close to the surface.

WHY IS THE ATMOSPHERE CHANGING?

People are changing the atmosphere. The changes started hundreds of years ago when people began cutting down forests and burning the wood. The invention of cars and other machines greatly increased the amount of greenhouse gases released into the atmosphere. Such machines burn fuels like wood, coal, oil, and natural gas. When these fuels burn, they add carbon dioxide to the atmosphere. Methane comes from producing coal.

Today, the air contains almost one-third more carbon dioxide than it did in 1750. The amount of methane has doubled.

Global warming could melt the ice at the poles. This would raise the level of the oceans. Water would then cover all the flat coastal lands. People would have less land on which to live and grow food.

Plants and animals are adapted to their climates. If the climate changes rapidly, many may not be able to adapt. Some species will simply die out. Others may spread to cooler climates. There, however, they will be struggling with species already in place.

CAN GLOBAL WARMING BE STOPPED?

Burning less wood, coal, oil, and natural gas will help stop global warming. Scientists recommend that people get more energy from sunlight, wind, tides, nuclear energy, and other sources that don’t burn fuel. Energy sources like these put little or no greenhouse gases into the air.

Scientists say trees can help prevent global warming. All growing plants take carbon dioxide out of the air. Trees do this especially well. They turn the carbon part of carbon dioxide into wood. They release the oxygen. In recent years, people have been cutting down forests all over the world. Scientists say vast new forests must be planted.

WHAT IS BEING DONE?

In 1997, officials from 160 countries met in Kyoto, Japan. They wrote an agreement called the Kyoto Protocol. Countries that sign this agreement promise to burn 5 percent less fossil fuel (coal, oil, and natural gas) by 2012. In 2002, however, the United States decided not to sign the treaty. Russia also has not signed the treaty. Without the United States and Russia, the treaty can’t work.