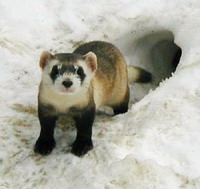 You have never watched a dodo bird scurry along the ground. You have never been frightened by a saber-toothed cat crouched in a tree. You have never seen the huge tusks of a mastodon. These animals once lived on Earth, but they all died out. They went extinct.

WHY DO ANIMALS GO EXTINCT?

Different kinds of animals have appeared and disappeared throughout Earth’s history. Some animals go extinct because the climate where they live changes. The climate may become wetter or drier. It may become warmer or cooler. If the animals cannot change, or adapt, to the new climate, they die.

Some animals go extinct because they cannot compete with other animals for food. Some animals go extinct because they are killed by enemies. New kinds of animals are always evolving. Evolving means that the animals are changing slowly from generation to generation. Small differences between parents, children, and grandchildren slowly add up over many, many generations. Eventually, a different kind of animal evolves.

WHAT KILLED THE DINOSAURS?

Scientists are not sure what caused the extinction of the dinosaurs. Many think an asteroid or comet may have crashed into Earth. The crash would have made a huge dust cloud. The cloud could have blocked out the Sun’s light for years. Without light, plants, dinosaurs, and other animals would die.

Many new animals, including large mammals, evolved after the dinosaurs died off. Scientists think that mass extinctions make way for new kinds of animals to develop.

HOW DO WE KNOW ABOUT EXTINCT ANIMALS?

Scientists study fossils to learn about extinct animals. Fossils are the remains of animals that have died. Fossils can be imprints of the animals left in rock. They can be bones that have turned to stone.

Most endangered animals today are in trouble because people are destroying their habitats. A habitat is a place where an animal normally lives. Forests, deserts, and wetlands are kinds of habitats. Many endangered animals live in tropical rain forests. People cut down rain forests to build farms, roads, and towns. They drain water from wetlands. Gorillas and koala bears are endangered because of destruction of the forests in which they live.

CAN WE SAVE ENDANGERED ANIMALS?

Governments can pass laws that make it illegal to hunt or sell endangered animals. They can pass laws against using chemicals that harm certain animals. DDT was a bug killer that once endangered the bald eagle and the peregrine falcon. DDT was banned, and the populations of these birds increased.

Sometimes people try to save one kind of endangered animal. They take some of the animals to zoos or laboratories. They breed the animals there. When there are enough animals, they set them free in the wild. Biologists are trying to save giant pandas and the California condor in this way.

Some biologists believe the best way to save endangered animals is to save their habitats. They work to set up wilderness areas such as parks and national forests where the animals can live. They keep the animals safe from hunters and other dangers.