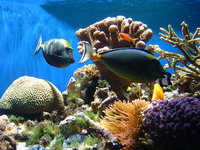 Imagine you are snorkeling in the warm ocean water around a tropical coral reef. You put on your mask and swim fins. You float around looking at the reef below you. The coral reef looks like strangely shaped rocks sticking up from the ocean floor. Crooked coral that looks like tree limbs twists up from cracks and caves in the reef. A big piece of coral that looks like a brain lies on the bottom. Orange and pink coral shaped like fans wave in the currents. Fish of all different shades and varieties of color swim near the reef.

Coral reefs play an important role in ocean life. Many kinds of plants, fish, and other animals live on and around a coral reef. Even the reef itself is made mostly of tiny coral animals, both living and dead.

HOW DO REEFS FORM?

Coral animals do not move around. These tiny creatures live together in groups called colonies. One single coral animal is called a polyp. It has a body shaped like a tube. Its mouth is on the top of the tube. Little tentacles around the mouth help the coral polyp catch food that floats by. Coral animals eat microscopic sea creatures called zooplankton.

The reef-building polyp makes a hard outer shell for itself from materials found in seawater. When the polyp dies, the shell is left behind. The shells from colonies of polyps build up over time to form a rock called limestone. This limestone becomes the inner part of the reef. The living coral animals form the top part of the reef. As each layer of polyps dies, their stony skeletons get added to the reef. A new layer then grows on top of the old. This is how a reef gets bigger.

Tiny single-celled algae called zooxanthellae live in coral polyps. The polyp and the algae make food for one another. The polyps could not live without the algae.

There are three kinds of coral reefs: fringing reefs, barrier reefs, and atolls. All three kinds grow in warm places. Coral reefs cannot form in water colder than about 68° Fahrenheit (about 20° Celsius). Reefs form in clear, shallow water. They need sunlight in order for plants and animals to live there.

Fringing reefs are close to shore. There is no lagoon or other body of water between a fringing reef and the shore. Barrier reefs are farther out in the ocean. There is usually a lagoon between a barrier reef and the shore. Barrier reefs can be huge. The largest group of reefs in the world is Australia’s Great Barrier Reef. It covers thousands of square kilometers. Atolls are really the tops of volcanoes that sank below the sea. The reef grows on the rim of the volcano. Inside the reef is a lagoon.

Scientists fear that many coral reefs are in danger. Many reefs have had a problem called bleaching. This occurs when the zooxanthellae, the algae that live in polyps, die off and the reef changes color. Then the coral polyps die. No one knows what causes bleaching.

A starfish called the Crown of Thorns starfish is also a threat to reefs. Sometimes too many of these starfish suddenly show up on a reef. The starfish kill the coral. No one knows why there are so many starfish.

Pollution is also a threat to coral reefs. Conservationists and governments are working to protect the Great Barrier Reef and other coral reefs.