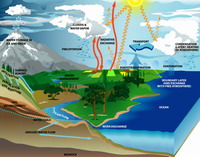 Maybe you recycle cans, glass, and paper. Did you know that nature recycles, too? One of the things nature recycles is water. Water goes from the ocean, lakes, and rivers into the air. Water falls from the air as rain or snow. Rain or snow eventually find their way back to the ocean. Nature’s recycling program for water is called the water cycle.

The water cycle has four stages: storage, evaporation, precipitation, and runoff. Most of the water on Earth is in the first stage, storage. Water on Earth gets stored in oceans, lakes, rivers, ice, and even underground. The oceans store the majority of this water.

EVAPORATION: INTO THE AIR

Water goes from storage into the atmosphere (the air that surrounds Earth) by a process called evaporation. When water evaporates, it changes from a liquid into an invisible gas. The gas is called water vapor. Water vapor goes up into the atmosphere.

PRECIPITATION: BACK TO EARTH

When the ice crystals or drops of water in a cloud get heavy enough, they fall to Earth as precipitation. Rain, snow, sleet, and hail are all forms of precipitation. Most precipitation falls into the oceans and goes right back into storage.

RUNOFF: MOVING AROUND ON LAND

Some water seeps into the ground. It fills cracks between rocks. Underground water also flows from places that are full to places that have less water.

Water from land flows into streams. Streams flow down mountains. Streams join together to make rivers and eventually the water flows into storage in the ocean. Then the water cycle starts all over again.