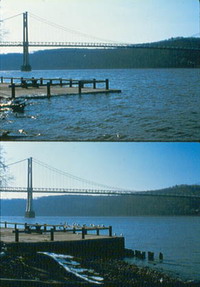 You wouldn’t want to get caught on the beach at the Bay of Fundy when the tide is coming in. The water rises fast at this bay in southeastern Canada. If you built a six-story building on the beach at low tide, it would be completely under water at high tide. Rivers that empty into the bay run backward as the tide comes in!

Then the tide begins to fall. Water flows out toward the sea. The level of the bay drops. Rivers return to normal. Soon it is low tide. You can see sea animals in shallow pools.

Gravity is the force that makes a ball fall back to the ground when you throw it up in the air. Earth’s gravity holds you to the ground. Ocean tides are caused mostly by the Moon’s gravity.

The Moon’s gravity pulls gently on Earth. Ocean water moves toward this pull. The pull causes the water to rise a bit on the side of the planet that faces the Moon. It’s high tide in the area closest to the Moon.

There’s another area of high tide on the side of Earth that faces away from the Moon. Gravity decreases with distance, so the Moon’s pull is weakest on that side. The reasons why this causes another high tide are complicated and difficult to explain in simple terms.

The locations on Earth where high tide is happening change as the planet spins. Every location on Earth goes through high tide twice each day.

Earth spins once around every 24 hours. As Earth turns, the areas of higher water shift to the two areas in line with the Moon at that particular time. Both of these areas are then at high tide. There are two high tides and two low tides each day.

WHAT ABOUT THE SUN?

The Sun’s gravity pulls on the oceans, too. The Sun is much farther away from us than the Moon. Its pull on Earth is less than half as strong as that of the Moon. But the Sun does have an effect on the tides.

Twice a month, the Sun, Moon, and Earth are in line with one another. High tides are at their highest then. Low tides are at their lowest. These are called spring tides. Spring tides happen when the Moon is full and at the new Moon. The Moon looks full when the Sun and the Moon are on opposite sides of Earth. At those times the Sun lights up the whole side of the Moon that faces Earth. The new Moon happens when the Moon is between the Sun and Earth. The Sun lights up the side of the Moon that faces away from Earth, so to us the Moon is dark and seems to disappear.

When the Sun, Earth, and the Moon form a right angle, like the letter “L”, high tides are at their lowest. Low tides are at their highest. These are called neap tides. Neap tides also occur twice a month. You can tell when neap tides will occur because the Moon looks like a perfect half-circle (the half moon).

The difference between high and low tide is called the tidal range. Very few places have a tidal range of 60 feet (18 meters) like the Bay of Fundy. But people who live by the ocean pay attention to tides. Boat harbors have tide gauges. These are long rulers that measure the tide.

High tides in combination with strong winds blowing toward shore can bring floods. Low tides can make the water dangerously shallow for some boats. They can get stuck if the water is too low.

A rising tide causes water to flow toward shore. A falling tide draws water away from shore. It can be hard for boats to move against the tide.

A surging tide carries huge amounts of energy. People can use this energy to produce electricity. Water from a rising tide is channeled through a dam. The flowing water turns turbines. Turbines are engines that change the energy of motion into electricity.

The dam traps the water behind it. When the tide falls, water flows back out. It turns the turbines again and generates more electricity.