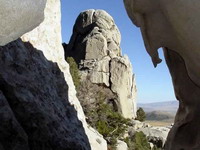 Rocks are everywhere. You can find them along a beach. There are rocks in deserts, on mountains, and in fields. There is rock at the bottom of the ocean. You might find rocks in your own backyard. Even soil is made partly of ground-up rock. Most of Earth’s crust, or outer layer, is made of rock. If you dig down deep enough in the ground, you will find a layer of solid rock. This layer is called bedrock.

Geologists (scientists who study rocks and the Earth) group rocks by how they formed. They put rocks into three main groups called igneous rocks, sedimentary rocks, and metamorphic rocks.

Magma that gets to the surface is called lava. When lava erupts again and again it piles up to form mountains called volcanoes. Erupting lava can run down a volcano’s sides like a river of fire.

Lava also oozes up through cracks in the ocean floor. The lava cools and makes new crust on the bottom of the sea.

Sometimes lava cools quickly to make a kind of glass rock called obsidian. Other important igneous rocks are granite and basalt. There is more basalt on Earth than any other kind of igneous rock.

Some sedimentary rocks are called chemical rocks. They form from minerals in water. The water dries up leaving layers of these minerals that turn into rock. Gypsum and halite (used for table salt) form this way.

THE LIVES OF ROCKS