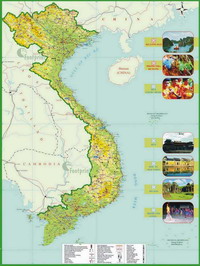 Have you ever drawn a picture of your street, town, or neighborhood, showing landmarks like trees, homes, and stores? If you have then you’re already a mapmaker. Or, to use a fancier word, you’re a cartographer!

WHAT ARE MAPS AND GLOBES FOR?

Maps show the locations of places on a sheet of paper. Globes are a type of map. But instead of being flat, globes are ball-shaped. This makes them more like Earth, the Moon, or other planets they represent.

Maps help show where one location is when compared with another. They can help you get from place to place. They can also provide other types of information. How high is a mountain range? How deep does a certain spot in the ocean go? Are there mineral deposits in a particular region? In what sections of the world do the most people live? These are all questions that the right kind of map can answer.

The most common maps are called general maps. They usually show a mix of geographic and political features. Geographic features are things in nature, such as mountains, lakes, and rivers. Political features, in comparison, are decided on by people. They include lines showing where one country or state ends and other ones begin.

Thematic maps are another type of map. Thematic maps do not give as many types of data as general maps. Instead, they give more details about a specific topic. A thematic map, for example, may provide specifics about an area’s climate or natural resources. It could show you what languages the people living there speak, or even how much coffee they drink!

Charts are another category of maps. These special maps help sea captains and airplane pilots navigate. Why are their maps different from others? Captains out on the ocean and pilots up in the air rely on landmarks and symbols not usually needed by others. Ships, for example, need to know where the shallow places in the ocean are and which way the water currents move.

If you run your finger along most maps, you’ll find a smooth surface. However, if you have a map or globe that’s done in relief you might feel bumps representing high places like mountains, and dips representing low places like valleys.

Some relief maps use clay or plastic molding to make the bumps and dips. Others rely on colors or shapes to represent areas that are higher up or lower down. A special kind of map called a stereogram requires 3-D glasses. These glasses trick your eyes into seeing a flat page’s surface as though it were shown in three dimensions.

HOW TO READ A MAP

Almost all maps contain certain aids to help you read them. North is toward the top of most maps. But to make sure, look for an arrow on the map showing one or more cardinal directions (north, south, east, and west).

A key or legend is also found on just about all maps. A legend is a list of the symbols used on the map, along with each symbol’s meaning. A legend helps you figure out what the dots, circles, colors, and squiggly lines on a map stand for. A dot might, for example, represent a city, museum, group of people, or something else entirely.

A scale allows you to determine the size of the area shown on a particular map. Does a centimeter or an inch stand for a mile, a kilometer, or a million miles? The scale helps you compare the short distances on the map with real-life distances.