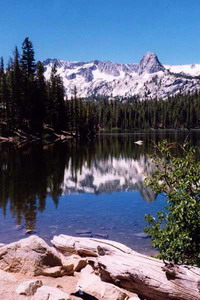 You can have lots of fun at a lake. Many people take vacations along lakes. You can go swimming and jump off a raft. You can go out on a boat. You can catch fish.
Some lakes are huge. They look as big as an ocean. You cannot see across the largest lakes.

WHAT MAKES A LAKE A LAKE?

Big lakes and small lakes are like bowls in the ground filled with water. Lakes are not part of the ocean. Lakes are called inland bodies of water.

HOW DID LAKES FORM?

The bowls in the ground that lakes fill sometimes formed because of sliding or moving rock and mud. Most lakes formed because of huge fields of ice called glaciers. Glaciers carved out most lakes when the ice moved. The ice ground up rock below. The ground-up rock froze in the ice. The glacier carried the rock away. This left a bowl-like shape in the ground. Rainwater filled up the bowl.

Glaciers carved out the five Great Lakes in North America. The great lakes are huge. Big ships travel on the great lakes. Lake Superior, one of the Great Lakes, is the biggest freshwater lake in the world.

There are many lakes in the far north, because thousands of years ago there were many glaciers in the north. Almost half of the lakes in the world are in Canada.

WHERE DOES LAKE WATER COME FROM?