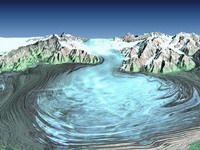 Imagine a river of ice so powerful it could grind down mountains, carve out valleys and lakebeds, and spit giant icebergs into the sea. The world is actually full of them! They’re called glaciers, and they’re found on every continent on Earth except Australia.

Glaciers may look like big, motionless blocks of ice and snow, but they’re always on the move. Glaciers are responsible for making the world look the way it does today.

WHAT IS A GLACIER?

A glacier is a large sheet of ice that moves slowly over the land. The world’s largest glaciers form where it is very cold year-round, such as the areas around the North Pole and South Pole. But they can form anywhere it is cold enough for snow and ice to remain all year without melting, such as tall mountains. Glaciers can even be found in high mountain ranges near the equator, such as the northern Andes of South America.

HOW DO GLACIERS FORM?

Glaciers form when new snow falls faster than the old snow can melt away. As more and more snow piles up, the newly fallen snow squashes the snow beneath it. Under the weight of hundreds, sometimes thousands, of feet of snow, the lower layers of the glacier are smashed tightly together.

The crushing weight of all these layers of snow and ice turns the bottom-most layers of the glacier into dense ice. The ice eventually becomes so heavy that the glacier moves downhill, like a gigantic, slow-moving river of ice.

HOW FAST DO GLACIERS MOVE?

Most glaciers move very slowly, just a few inches a day. But some glaciers can move as much as 100 feet (30 meters) a day, about the distance from home plate to first base on a baseball field. That may not seem very fast. Even a snail can move faster than a glacier! But the movement of glaciers seems incredible when you consider that they can be the size of mountains.

There are several types of glaciers. Mountain glaciers form in high mountains. They fill mountain valleys and move slowly downhill. Ice cap glaciers are larger. They can cover entire islands or large inland areas in arctic areas. But the largest glaciers of all are called ice sheets. They cover huge areas of land in the coldest arctic areas. In fact, they can span entire continents and stretch into the sea, where pieces break off and become icebergs.

Most glaciers change in size over time. As you might expect, glaciers usually grow bigger in the winter when there’s a lot of snow. They get smaller in summer when warmer weather melts some of the snow and ice away.

Glaciers also grow or shrink over very long periods of time. As Earth’s climate cools, glaciers expand. They shrink when the climate warms.

Ten thousand years ago, during a cold period in Earth’s history called an ice age, an enormous ice sheet blanketed more than half of North America. The movement of this great ice sheet formed a lot of the landscape we see today.

HOW DO GLACIERS CHANGE THE LAND?

When glaciers move, they change the shape of the land under them. Glaciers scour the surface and grind larger rocks down into small pieces. In the mountains, glaciers can carve out large U-shaped valleys.

Glaciers scoop up millions of tons of rock and drop it somewhere else. As a glacier in the mountains moves, it pushes huge piles of rock and dirt in front of itself and off to the sides. This material forms uneven hills called moraines.

Glaciers also have an impact when they melt away. When a glacier melts, the ice turns into water that can form new rivers and lakes. When a glacier retreats near the sea, it can leave a deep inlet called a fjord.