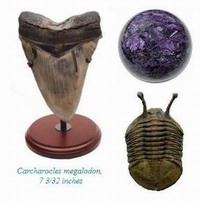 Does it sometimes seem as if the school day will never end? If you think it takes a long time for school to let out, imagine how long it must take for a mountain to form or an ocean to dry up. It takes millions or even billions of years. The long periods of time that it takes for major changes to happen on Earth are called geologic time. Geologic time stretches from when the Earth first formed until today.

HOW DO YOU COUNT GEOLOGIC TIME?

You say a person was a baby and then a child and then a teenager and then a grown-up. Geologists use the words eon, era, period, and epoch when they talk about the stages of Earth.

Geologists divide eons into eras just as you divide years into months. They divide eras into periods. They divide periods into epochs.

WHAT HAPPENED DURING THESE TIMES?

Things really started happening in the Phanerozoic Eon. Lots of invertebrates (animals without backbones) appeared at the beginning of the eon. Geologists say the Phanerozoic Eon has three eras called the Paleozoic, Mesozoic, and Cenozoic.

WHEN DID THE DINOSAURS LIVE?

Dinosaurs lived during the Mesozoic Era. This era began about 240 million years ago and lasted until about 65 million years ago. It had three periods called the Triassic, Jurassic, and Cretaceous. The movie Jurassic Park is named for the Jurassic Period.

All the dinosaurs went extinct (died off) at the end of the Mesozoic Era. Scientists think that a space rock called an asteroid may have crashed into Earth at that time. The crash may have changed Earth so that dinosaurs could no longer live here.

WHEN DID HUMANS APPEAR?

The earliest ancestors of human beings appeared about 6 million years ago during the Tertiary Period. These ancestors were shorter, hairier, and less smart than people are today.

Geologists divide the next period, the Quaternary, into the Pleistocene and Holocene epochs. Modern people did not appear until about 200,000 years ago in the Pleistocene Epoch.

During the Pleistocene, huge sheets of ice covered most of Earth. These times were called ice ages. The last Ice Age ended about 10,000 years ago at the beginning of the Holocene Epoch. We are living in the Holocene—it hasn’t ended yet.

HOW DO YOU TELL GEOLOGIC TIME?

Geologists use layers of rock to tell geologic time. Rock on Earth formed in layers. The deepest layers are usually the oldest layers. The layers on top are the youngest layers.

Scientists have tests for telling how old a rock is. They use the tests and look at fossils in rock layers to put together the history of Earth.