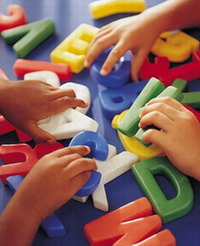 From Italian, it took cameo, stanza, and violin, for example. From Spanish and Portuguese, it borrowed the words alligator, canyon, and sombrero. From Native Americans, it got raccoon and wigwam. contributed llama and quinine. The islands gave English barbecue and cannibal. From Africa came chimpanzee and zebra, from came bandanna, curry, and punch, and from came kangaroo and boomerang.

Science caused an explosion in words. Some words in science combine parts of Greek and Latin words. They include penicillin, stethoscope, and supersonic. Others were borrowed from languages spoken today. Robot comes from a Czech word.

BURPS AND OTHER WAYS ENGLISH EXPANDS

Onomatopoeia (pronounced AHN-uh-MAH-tuh-PEE-uh) is the creation of words that imitate natural sounds, words such as burp and clink. Another way to get new words is adding prefixes and suffixes. Prefixes, such as mis- or ex-, go onto the front of words and create misread, ex-boyfriend, and other words. Suffixes, such as -ness or –ist, attach to the end of words.

Separate words can form compound words, such as bonehead and downpour. Words can collapse into each other, such as brunch, from breakfast and lunch.

It’s common for new words to grow from previously existing words—for example, to burgle, formed from burglar. The use of words can change. Shower started out meaning “light rain.” It later referred to a bathroom shower, and then became used as a verb, to shower.

WHY SPELLING IS SO TUFF

English is said to have one of the most difficult spelling systems in the world. Take a look at these four words: anxious, fission, fuchsia, and ocean. They all spell the sh sound differently. English has 14 different spellings for the sh sound.

Throughout history, the spelling of English words hasn’t changed as much as their sounds have. For example, people once pronounced the k in knife and the gh in right. We no longer say those letters, but we’ve kept the old spelling. English also tends to hold on to the spelling of words it borrows from other languages.

The weirdest examples of differences between spelling and pronunciation in English are the six different pronunciations of ough. Say these words aloud: bough, cough, thorough, thought, through, and rough. Some spellings have lasted from a time when the gh was pronounced in English.

The English language is unusual in the way it borrows and grows. New words are constantly being introduced. The verb to google is a new word that means “to do a fast Internet search.” It comes from the widely used Internet search engine, Google.