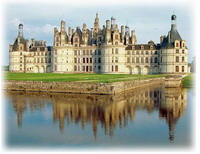 The king watched from his castle as enemy horsemen charged across the meadow. His castle was strong. Thick walls of stone protected the king and his people inside. A deep, water-filled ditch around the castle, called a moat, offered further protection. As the enemy approached, guards quickly raised the drawbridge spanning the moat. Soldiers inside the castle prepared for battle.

WHAT IS A CASTLE?

A castle was the fortress and home of a monarch (a king or queen) or nobleman. It offered excellent protection to the person who owned it. A castle helped its owner defend the land on which it stood. It also served as a residence for the owner’s family and many servants.

WHEN WERE CASTLES BUILT?

Most of the castles we think of today were built in Europe. They were constructed from about ad 1000 to about 1500, during a period known as the Middle Ages.

WHY WERE CASTLES BUILT?

Castles played an important role in a system called feudalism. That system arose in Europe after the fall of the Roman Empire. In feudalism, a king granted land to nobles. In return, the nobles pledged to serve the king and provide him with soldiers.

Nobles built castles on the lands given to them by the king. But some nobles simply claimed land as their own and built a castle on it. That was asking for trouble. There were many power struggles between nobles and kings, and among the nobles themselves. Warfare was frequent. If you wanted to protect yourself, you needed a good castle.

The earliest castles were nothing more than a wooden fort at the top of a hill called a motte. A deep ditch surrounded the hill. Inside the ditch was a wooden wall. The area between the wall and the wooden fort was called a bailey. This is why the first castles are known as motte-and-bailey castles.

The bailey was at the heart of castle life. Blacksmiths and woodworkers toiled in their workshops in the bailey. Stables for livestock, a kitchen, and most living quarters could be found there. The castle’s owner lived in the fort on the hill. Atop the fort was the castle’s main lookout post.

Motte-and-bailey castles were not very sturdy. The wooden fort and walls rotted and could be burned by an enemy. Something better was needed. By the 1100s, most kings and nobles were building their castles out of stone.

A typical stone castle had several main parts. At the center of the castle was a tall and very strong building called the keep, or donjon. This is where people in the castle made their last stand if the outer defenses failed. The keep was set in a courtyard, where there were workshops, stables, and a kitchen.

High, thick walls surrounded the keep and the courtyard. Strong, round defensive towers stood at the corners of the walls. Guards walked along the tops of the walls and towers.

Many stone castles were surrounded by a wide ditch called a moat. Some moats were filled with water, but many were not. The only way into the castle was across a wooden drawbridge over the moat. If enemies attacked, the defenders raised the bridge. Then they lowered a heavy iron-and-wood barrier called a portcullis to block the entrance to the castle.

A well-built castle was a pretty safe place to be. Attackers had a hard time getting in. They had four main options. They could go over the walls using ladders. They could smash through the walls. Or they could dig under the walls and try to get part of one to fall down. If none of those things worked, they could just camp outside until the defenders ran out of food.

Attackers sometimes brought large machines called siege engines with them to break through castle doors or walls. The simplest siege engine was the battering ram. This was a heavy wooden beam with a metal cap. The earliest rams were carried on the shoulders of men. Later, the rams were mounted on wheels.

Perhaps the most famous siege engine was the catapult. This device hurled big, heavy stones at the castle walls. Catapults were not very effective weapons. But by the 1500s, they were replaced by one that was: the gunpowder cannon.

In the early 1500s, cannons entered wide use in warfare. Cannonballs could gouge into the base of stone walls and weaken them. The massive walls then collapsed under their own weight. Castle builders soon learned to make angled, earth-packed walls that could withstand cannon fire. But by then society was changing. The feudal age was ending, and castles were no longer needed.