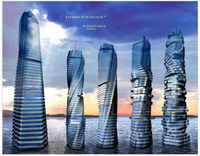 We ask for a lot from our buildings. They have to keep out the rain, wind, rats, and bugs, not to mention our enemies. They need to store our stuff, keep us warm when it’s cold, and keep us cool when it’s too hot. We also like our buildings to be well constructed and beautiful.

Architecture is the important art and science of making buildings. Architects are the bosses who design buildings and supervise their construction.

WHAT ARE BUILDINGS MADE OF?

Buildings once were made of whatever materials were available. Where forests grew, for example, people used wood. Where there were no trees, people used the earth itself.

They dried mud in the sun to make bricks. In the far north, they used blocks of snow or ice.

These materials aren’t long-lasting, however. Mud bricks wear away. Wooden buildings catch fire and burn down.

Stone won’t catch fire, and it can be expected to endure. Many kinds of stone, including marble and limestone, are good materials to build with. Steel is strong and lightweight. It lets architects build tall buildings, like skyscrapers.

But deciding on what materials to use isn’t usually the first thing an architect thinks about. The architect needs to know the reason for the building. How will the building be used?

Shelter is the most basic reason for building. Buildings shelter us at home, at work, and at play. All buildings must shelter us from rain, wind, sun, and cold.

Buildings also provide security. Some of the world’s most permanent structures were built to defend against enemies. Castles had moats and drawbridges to keep enemies out, and high walls from which to pour down boiling oil on them.

Some of the most impressive buildings provide places for worship. Temples, churches, and mosques must meet spiritual needs. The soaring heights of a Gothic cathedral, for example, inspire amazement and admiration.

Some buildings are just for showing off. Kings and emperors insisted on grand palaces and castles. People with money have always demanded that architecture display their wealth. Today, large corporations, governments, and universities demonstrate their importance by putting up impressive buildings.

We judge the beauty of architecture in various ways. Some buildings have been judged especially great. In the past, architects lavished attention on religious structures. Today, many of the most exciting buildings are museums and houses.

Many people think the Greek temples are the most beautiful shrines of all time. The Greeks put columns around the outside of their temples. One masterpiece is the Parthenon, a temple on a hilltop in Athens, Greece. We admire its simplicity, but the carvings on the temple were once painted bright colors.

Saint Peter’s in Vatican City was a major project of the 1500s. With its dome by Michelangelo, Saint Peter’s influenced many state capitol buildings in the United States.

America’s most famous architect is Frank Lloyd Wright. A number of his buildings are national landmarks. Most famous are the Guggenheim Museum in New York City and Fallingwater, a house in Pennsylvania. The Guggenheim’s spiraling ramp provides a dramatic showcase for artwork. Fallingwater overlooks a stream and waterfall. Its terraces appear to project from the surrounding hillside.